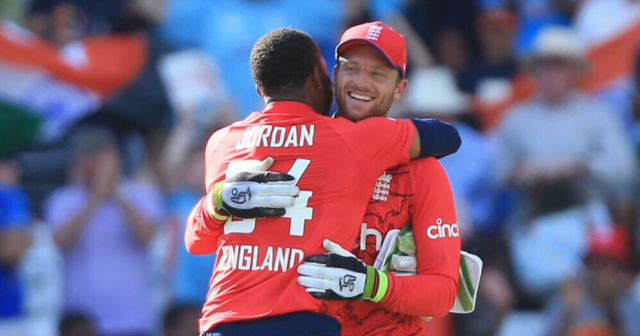 ENGLAND survived a dazzling century from Indian batsman Suryakumar Yadav and notched their first win of the Jos Buttler era.

Yadav made 117 from 55 balls and went close to overhauling England’s mighty total of 215-7 in a typical runfest at Trent Bridge.

England won by 17 runs and Buttler enjoyed his first victory since taking over from Eoin Morgan as white-ball captain. But India still won the Twenty20 series 2-1.

Reece Topley, the 6ft 7in left-arm seamer who has overcome several stress fractures of the back, took two of those wickets and a third later when Shreyas Iyer, who put on 119 with Yadav for the fourth wicket, under-edged a catch behind.

Player of the Match Topley said: “You have to ride the game when things go your way because there are a lot of times when they don’t.

“I’m not a big cricket watcher so I’ve not really seen Yadav play before. There were some amazing shots but I also felt we were always taking his wicket away from winning the match.”

Richard Gleeson, who made such an impressive debut in England’s defeat at Edgbaston on Saturday, had another good game with 1-31 in four overs.

Yadav advanced from 50 to 100 in just 16 balls and showed he can hit the ball through 360 degrees with his wrist work and imagination.

After chasing in the first two games and losing by 50 runs and 49 runs, England batted first against and Indian attack lacking their two stars bowlers in Bhuvneshwar Kumar and Jasprit Bumrah, both rested with the series already secure.

Buttler’s modest sequence continued when, after three juicy boundaries, he dragged on. And Jason Roy again struggled with 27 from 26 deliveries until he was caught behind.

Dawid Malan made India pay for dropping him on four – a relatively straightforward caught and bowled chance to Harshal Patel – and surged to 77 from just 39 balls.

Malan is frequently overlooked or underestimated as a T20 batsmen alongside more power-packed players such as Buttler or Liam Livingstone.

But he has previously been ranked No.1 in the world in the shortest format and is still fourth in the list.

Livingstone made 42 not out, with four sixes, and England went past 200 on the highest-scoring ground in the country.

A three-match 50-over series against India begins at the Oval on Tuesday.

Skipper Buttler said: “That was good fun and much more like what we’re used to seeing with the bat after a couple of disappointing performances in the previous two games.

“That was an incredible knock from Yadav, one of the best hundreds I’ve seen.”