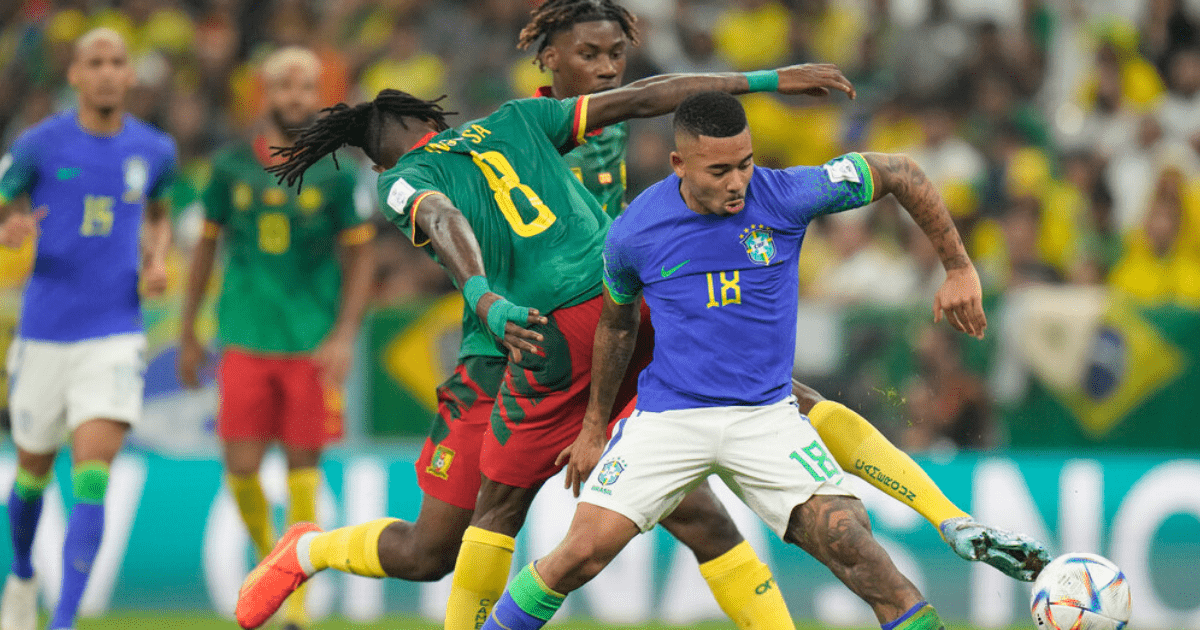 GABRIEL JESUS is currently on a flight back to London after being ruled out of the World Cup.

And SunSport understands the Arsenal striker will find out how serious his knee injury is TOMORROW following a consultation with club doctors.

Gabriel Jesus in action for Brazil against Cameroon

The 25-year-old picked up the knock in the 64th minute of the Samba Boys’ final World Cup group stage clash – a 1-0 defeat to Cameroon – having come off the bench.

And following a scan, Brazil medics confirmed his Qatar journey was over ahead of their Last 16 tie with South Korea.

There remain doubts over whether Jesus will need surgery, or for how long he will be out of action for, with some reports suggesting THREE months.

That picture will become clearer when the ex-Manchester City forward reports to London Colney on Monday morning, where his knee will be assessed further.

What is for certain is that he will miss Arsenal’s Boxing Day clash with West Ham as well as their New Years’ Eve trip to Brighton and potentially a January 3 game versus Newcastle.

He will then be in a race against time to get back into Mikel Arteta’s squad for two crucial back-to-back fixtures away at rivals Tottenham and then at home to Manchester United later that month.

Arsenal are currently five points clear at the top of the Premier League, having lost just once.

But they will now be reliant on back-up striker Eddie Nketiah to produce the goals that have seen the north London club so far romp the Prem.

Jesus is the second Arsenal player to leave the World Cup early, with defender Ben White leaving the England camp due to personal reasons.

Following news of his injury, Jesus tweeted: “If there was a timeline and I could see you and tell you something, I would say ‘Gabriel, you are a winner’.

“Thank you to everyone who sent messages of support and affection.”

Brazil boss Tite also hit back at claims which suggested he knew Jesus had an injury BEFORE he played against Cameroon.

He said: “I don’t like evil lies, and at no time whatsoever did we play for a victory at the risk of a peril to a player.

“The liars, the haters out there – go and do something else and stop giving fake news.

“I am very sorry for Gabriel and yesterday we had Thiago Silva, Marquinhos, Neymar and (assistant) Cesar Sampiao – who has lived with the experience of being removed from the team – talking with him.

“Not to take the pain away because obviously we can’t, but just to make them feel better, strengthen them, and take part as much as possible.”

Did you miss our previous article…
https://www.sportingexcitement.com/football/premier-league/nottingham-forest-sign-skateboard-loving-gustavo-scarpa-as-he-becomes-clubs-24th-transfer-of-the-season/

Advertisement. Scroll to continue reading.
In this article:gabrieljesus, onflight, threemonths