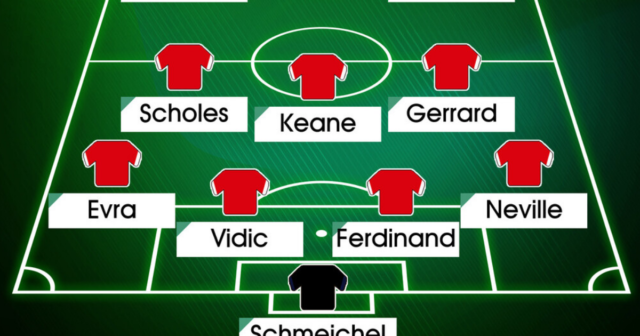 MANCHESTER UNITED host Liverpool on Sunday and could move within a point of their rivals if they win.

But Liverpool have enjoyed a brilliant start to the season, and remain undefeated in the league.

Jurgen Klopp’s side have proven their pedigree away from home too, beating La Liga champions Atletico Madrid 3-2 on Wednesday.

Mohamed Salah continued his scoring spree with two goals at the Wanda Metropolitano, and he makes the team for our best combined XI of United and Liverpool players from the Premier League era.

With five Premier League titles to his name it would be impossible to exclude the great Dane.

He was a key member of United’s first Premier League win in 1993 and also played a pivotal role in the 1999 treble-winning side.

Alisson has been a brilliant signing for Liverpool and has made a huge difference to the team since his arrival, but despite his excellent distribution he still falls short of Schmeichel.

Perhaps the greatest defensive partnership of the Premier League era, the pair were rock solid as United won the league three years running between 2007-2009.

They also contributed to the Champions League win in 2008 and complemented one another perfectly.

But there is an argument to include Virgil van Dijk – Liverpool fans will argue Fernando Torres consistently gave Vidic nightmares.

Neville often underplays his playing ability as a pundit on Sky Sports nowadays but there is no doubt he deserves a spot in this side.

Trent Alexander-Arnold could rival his position in the side in future but first he must prove his consistency for a few more years.

As for Evra, his pace and power offered United a different outlet when he arrived from Monaco in 2006.

United had lacked a dynamic left-back for several years and Evra quickly became one of the most consistent left-backs in the league.

Another who fit that mould was Dennis Irwin, who only ever made one mistake for United according to Sir Alex Ferguson.

The legendary manager once said if he was picking his all-time United XI, Irwin would be the one player guaranteed a place in the side. 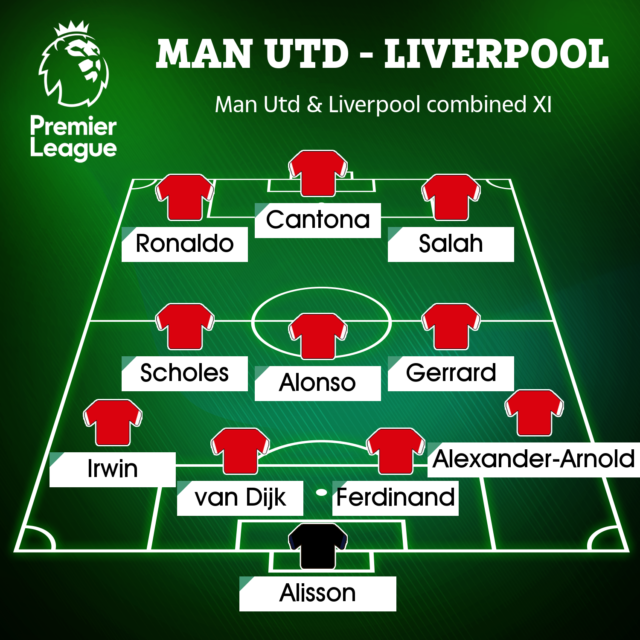 This trio practically pick themselves given the legacies they have left behind.

All three are legends for their respective clubs and have numerous medals and international caps between them.

Keane and Gerrard are arguably the greatest captains of United and Liverpool and Scholes’ brilliance has been highlighted by the endless list of former stars who claim he is the best midfielder of all time.

This is where things get tricky, as there are countless attacking stars from both clubs who could make the team.

But Salah and Ronaldo are two of the greatest players to grace the Premier League and their goals alone set them apart from anyone else.

Salah has the record for most goals in a 38-game Prem season and several others to boast of – he is in top form currently with 12 goals in 11 games this term.

His highlight reel is jaw-dropping and the same can be said of Ronaldo, who has scored all kinds of goals for United.

CR7 has underlined his quality and important since returning to Old Trafford with key goals in Champions League wins over Villareal and Atalanta – he has six in eight this campaign.

Luis Suarez wins the third spot in our team. He completely transformed an average Liverpool side into title contenders and scored 31 goals in 33 league games one year.

He did not win much with the Reds but his success in Spain proves what a world-class player he is.