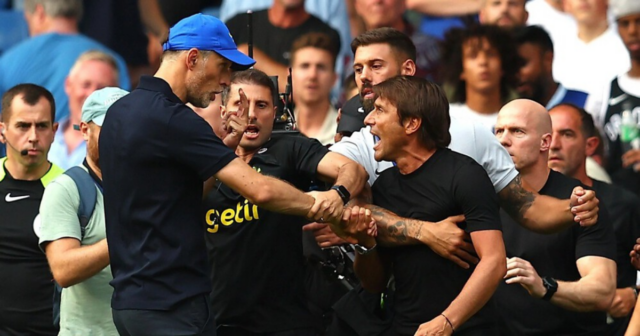 THOMAS TUCHEL revealed he clashed with Antonio Conte because the Italian refused to look him in the eye during their full-time handshake.

The pair came face to face after Tottenham’s first goal and clashed at the end of the match with Tuchel refusing to let Conte’s hand go.

Tuchel appeared to tell Conte to look him in the eye

The German admitted he let his emotion get the better of him and reacted when Conte refused to meet his gaze at the end of the 2-2 draw.

Tuchel said after the match: “I thought when we shake hands you looked in each other eyes. He had a different opinion. It was not necessary but a lot of things were not necessary.

“We both got a red card. I think it was not necessary. Another poor referee decision.

“No problem. It’s emotional, it’s football, it’s the game, it’s the Premier League. You love it, we are emotional on the touchline.

“If we meet, we meet. It’s between a football match, it’s men (and) two competitors.”

While Tuchel was open about his confrontation with Conte, the Spurs boss refused to comment on the flair up.

He was asked about the handshake incident on several occasions but chose to speak about the match instead.

Conte said in his post-match press conference: “In my opinion, it’s better to talk about the game. It was an exciting game, a difficult game for both teams, but you know we want to try in every game to be competitive.

“I think Chelsea showed today they are a really good team. But compared to last season we did a bit well than last season.

“No, but I repeat I don’t want to comment on the situation. It’s not the most important thing. If there’s a problem. it’s between me and him.