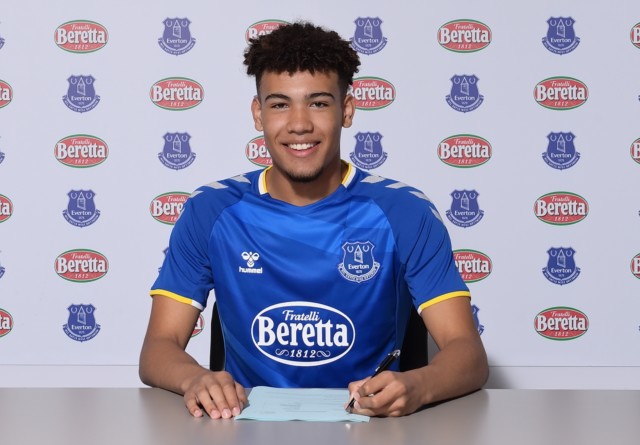 EVERTON have announced the signing of highly-rated teenager Francis Okoronkwo from Sunderland.

The Toffees agreed a £1million fee to sign the forward earlier this summer.

Everton have signed Francis Okoronkwo from Sunderland for £1million

And after Okoronkwo turned 17 on Saturday, he was finally able to sign his first professional contract with Everton until June 2024.

Okoronkwo had been with Sunderland since he was 12 years old.

And the 6ft 3in prodigy established himself as one of the top names in academy football with some fine performances at youth level.

And he will go straight into Everton’s youth side coached by Paul Tait.

The Liverpool Echo claims Toffees insiders are thrilled about the bargain deal, with some likening it to Dominic Calvert-Lewin’s £1.5m move from Sheffield United in 2016.

Should Okoronkwo immediately impress at Finch Farm, there is also a good chance he will be bumped up to Everton’s U23s.

The youngster’s Goodison Park move is the last piece of summer business for manager Rafa Benitez.

After replacing Carlo Ancelotti, Benitez oversaw a frugal transfer window that resulted in less than £2m spent on the senior squad.

The entirety of that fee went on Bayer Leverkusen winger Demarai Gray.

But Benitez’s policy is going well so far, with Everton picking up ten points from their opening five games.

However, Saturday’s 3-0 defeat to Aston Villa is sure to keep the Spaniard up at night.