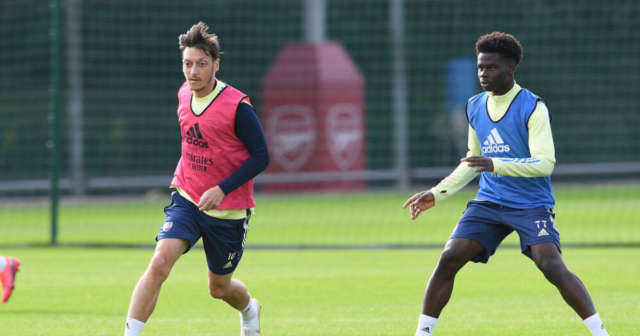 The ex-Gunners playmaker revealed he “felt very much” for his former Arsenal team-mate and praised the youngster for taking a pen in a major match.

Misses by Marcus Rashford and Jadon Sancho in addition to Saka would later lead to all three being targeted by trolls posting racist comments and monkey emojis on social media.

Saka, 19, who reflected on his experiences, has pledged to overcome negativity and called on social media companies to take action against online hate.

And his sentiments have been echoed by Ozil who plays for Turkish giants Fenerbahce.

The ex-Germany playmaker also saw one of his spot-kicks saved by Donnarumma in Arsenal’s loss to Bayern Munich in a  2014 Champions League clash.

Ozil told Sky Sports: “I felt very much for Bukayo, I know from my own experience how it feels to miss a penalty.

“In a final, as the last one, to take on the responsibility of an entire nation as a young player – respect. Not many players would dare to do that.

“There will always be people who racially abuse and scapegoat people of different backgrounds and skin colour when they lose.

“Unfortunately, there will always be a small part of our community that racially insults and threatens players.

“We should focus much more on the positive messages that keep players strong.”

And the Arsenal ace’s club boss Mikel Arteta is among those who have called for tougher measures to stop players being targeted by accounts posting racist messages.

Arteta said: “He (Saka) has received a lot of love and support from the world of football, not only from Arsenal but with the national team and all the English fans because he doesn’t deserve anything like he has been through.

“He’s had a phenomenal season and in football, if you want to be part of the greatest you have to know at 19 that you will lose more than you win unfortunately in this game and there’s no exception to that rule.

“Hopefully we can use this to make a strong statement and we have to stop racist abuse on social media and people using social media to hide and put people in really bad places.

“Hopefully, the laws will be stronger.

“We are all going to make a strong case out of that and it can make a big impact because I think it’s the moment to put it right.”