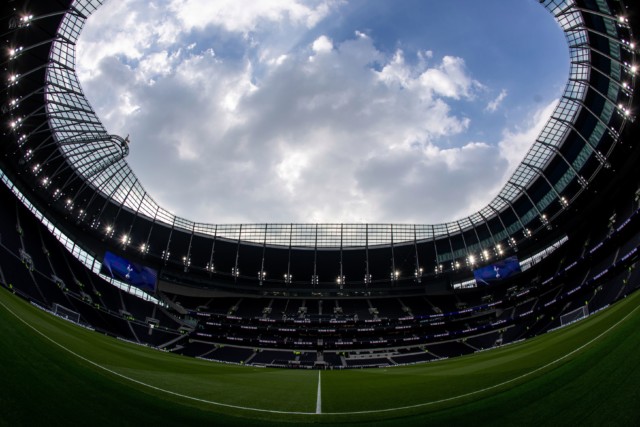 TOTTENHAM fans are pleased as punch at their new stadium – and now it is about to host its first boxing match.

The ground is widely regarded as one of the best-designed arenas in the world and has transformed the way we think about building sporting venues.

The first match at the new ground was an Under-18s match between Spurs and Southampton, which was won 3-1 by Tottenham, with J’Neil Bennett scoring the first goal.

Crystal Palace were the first Premier League opponents at Tottenham Hotspur Stadium, with Son-Heung min scoring the first goal in a 2-0 win.

And Anthony Joshua’s fight against Oleksandr Usyk is the latest big event to be hosted at the North London ground.

How big is the Tottenham Hotspur Stadium?

The Tottenham Hotspur Stadium has a capacity of 62,850.

That makes it bigger than fierce rivals Arsenal’s Emirates Stadium, which holds just 60,260.

But chairman Daniel Levy said on the morning of the opening that the capacity had nothing to do with getting one over on the Gunners.

He commented: “It’s nothing to do with Arsenal.

“This is a 62,000-seater stadium – the second biggest [club stadium] in the UK – and I think our fans deserve it, and our players deserve to play in front of a big audience.

“I’m obviously proud, but I’m proud for all our fans. I think we’re delivering something which is great for them, great for our players, and it’s great for London.

“This is an iconic stadium.

“I take a long-term view. It’s very hard to be right at the top, but we are one of the biggest clubs in the world and we will continue growing.

“We want to be there and we want to win.”

As well as hosting Spurs games, the Tottenham Hotspur Stadium has hosted NFL matches, with the Oakland Raiders’ game against Seattle Seahawks the first clash on the pitch which lies underneath the Desso grass surface for association football games.

How many boxing matches have been at Tottenham Hotspur Stadium?

Anthony Joshua’s fight against Oleksandr Usyk on Saturday, September 25, 2021 is the first boxing event at the ground.

The old White Hart Lane had hosted several boxing matches, including the infamous clash between Michael Watson and Chris Eubank in 1991, which saw Watson partially disabled for the rest of his life.

How much did the Tottenham Hotspur Stadium cost?

The new Tottenham Hostpur Stadium cost around £850m, making it the second most expensive UK stadium ever, behind Wembley, with the Emirates the third most expensive.

Only Wembley and Zenit St Petersburg’s Krestovsky Stadium have cost more to build in Europe.