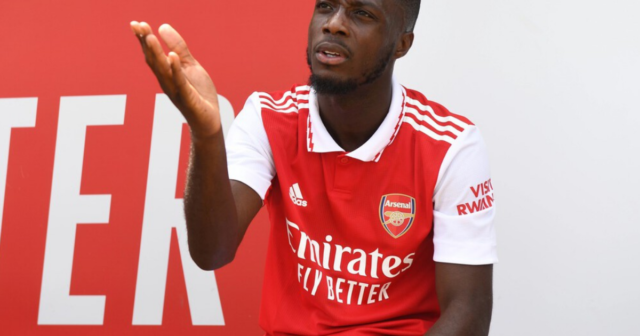 ARSENAL’S previous recruitment policy was a “mess” – typified by the £72m deal for Nicolas Pepe.

That’s the view of Gunners legend Alan Smith, who has hailed the work done by technical director Edu and boss Mikel Arteta to transform their transfer strategy.

And now, he has told them to go get Leicester City’s Youri Tielemans.

The capture of £45m Gabriel Jesus from Manchester City has taken Arsenal’s early window activity to four players so far.

The club have come a long way since the days of relying on deadline day miracles or risky punts, such as forking out for Lille’s Pepe in 2019 only to be left disappointed.

The Ivory Coast international has scored just 16 goals in 80 Premier League appearances, and is now down the pecking order behind Arsenal’s superb young guns.

And speaking on behalf of 888, Smith said: “All successful clubs on the pitch need a successful recruitment department off it, like Liverpool and Manchester City.

“They have a smooth operation. It was a mess for Arsenal at one stage, highlighted by the signing on Nicolas Pepe.

“There has been a turnover of personnel. Now, Edu is on the same page as Mikel Arteta and they think along the same lines in terms of players with is vital.

“You need your technical director and manager to be working closely together. They have done some business early but I am sure they still want to do some more.

“You want as many in as possible for pre-season but they don’t feel they have finished just yet. They need a bigger and better squad.”

One of those expected to arrive at the Emirates is Foxes midfielder Tielemans, who is eyeing a move away from the King Power with just a year left on his current deal.

Smith added: “It was difficult for Youri last year. I think his head had been turned, but Leicester also struggled with injuries.

“He is clearly a man of great talent. He loves getting forward, he is a very good athlete and gets up and down the pitch, he has an eye for goal and the best years are still ahead of him.

“You feel he would hit the ground running. It would be a real coup for Arsenal to bring him in.”

Arsenal’s attacking line-up is starting to take shape after Jesus’ arrival, who will be competing with Eddie Nketiah for that lone striker role.

Fresh off the back of signing of new five-year deal – and being given the historic No.14 shirt – Nketiah is likely to start the season on the bench with chances to impress in Europe.

And Smith said: “Jesus is ahead in the pecking order but I don’t think Eddie will get too frustrated. He hasn’t signed this contract thinking he will start every week.

“He is going to get more game time than he has previously and he has shown to Arteta that he is a more enticing proposition.

“But Jesus has the No.9 jersey and that’s a big statement. You wear that for Arsenal and you are expected to score goals. There is pressure on you.

“I think he likes that. He thrives on it. He feels he has the best years ahead of him and if he is consistently picked through the middle he will only improve.”

***Alan Smith was speaking on behalf of 888. Head to 888 now to play a range of exciting and entertaining games***

Advertisement. Scroll to continue reading.
In this article:nicolaspepe, technicaldirector, thework