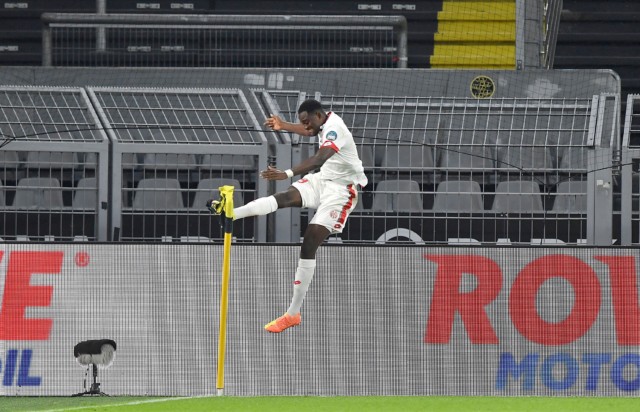 The French striker, 23, always wanted to play in the Premier League since he was a young boy growing up in Paris.

Jean-Phillippe Mateta has joined Crystal Palace on loan from Mainz

Now he has his chance after joining the Eagles on an 18-month loan from Mainz – with an option to make the move permanent.

Mateta said: “I’m very happy to come to Crystal Palace and I look forward to training.

“Playing in the Premier League was my dream when I was a child.

“Now I can play, I will show the fans of Crystal Palace what I can do.”

Mateta netted ten goals in 17 appearances for Bundesliga side Mainz earlier this season.

Zaha leads the Eagles’ scoring charts with eight this term – with Christian Benteke next best on three.

The Belgian could be one of two forwards out of the Selhurst Park door in the summer if Mateta impresses.

Record signing Christian Benteke could be out of the Palace door

Palace’s £32million record signing Benteke, 30, is out of contract at the end of the season and has netted just 26 goals in 126 matches.

His compatriot Michy Batshauyi, 27, has failed to impress during his loan spell from Chelsea.

He is yet to score a Premier League goal for the Eagles this season.