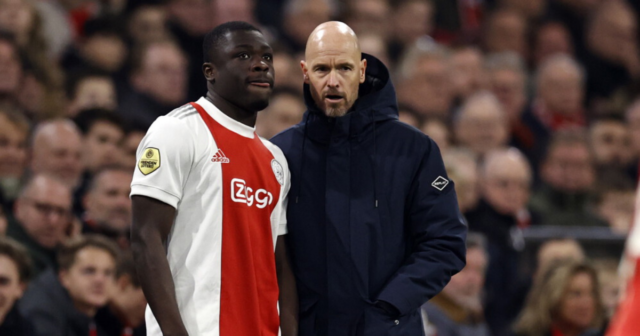 The 20-year-old is claimed to be desperate to quit the Bundesliga outfit.

After being on the verge of a return to Ajax, Manchester United are now eyeing a swoop, according to German outlet Bild.

It’s claimed Ten Hag and Brobbey have held discussions over the phone with the United boss a big fan of his fellow Dutchman.

The forward is keen for a move this window and Bild say Leipzig have set an asking price of £13m.

Brobbey is reportedly deemed surplus to requirements at Leipzig.

The youngster spent the second half of last season on loan at Ajax under Ten Hag, scoring an impressive seven goals in just 11 games.

He joked in April after Ten Hag was announced as Manchester United manager that he wanted the Red Devils gaffer to sign him.

And now a switch to the Premier League to be reunited with Ten Hag is potentially on the cards.

Bild say the prospect of Brobbey joining the Red Devils is “totally open”.

Brobbey came through the youth set-up at Ajax before leaving for Leipzig last summer.

But he failed to find the back of the net in 13 appearances for the Bundesliga side.

He was then loaned back to Ajax in January this year, and is already desperate to leave the German side.