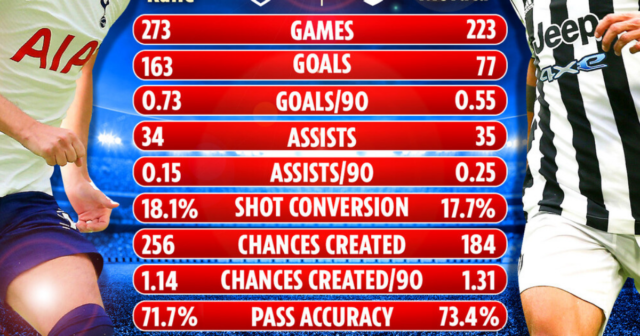 TOTTENHAM have made Alvaro Morata their ‘No1 priority’ to replace Harry Kane should their star man quit next summer, according to reports.

Spurs managed to cling on to the England captain, 28, in the summer but know they risk losing him in 2022.

Kane has long made it known he’s keen to get his hands on some silverware – with the North London side’s drought stretching back to the 2008 League Cup.

Manchester City were expected to make a move last summer in a deal worth around £150million – but instead splashing £100m on Three Lions pal Jack Grealish.

But Tottenham know Kane is almost certain to leave next summer – particularly if the club fail to win any trophies.

Morata, also 28, is currently in the second year of a two-season loan stint at Juventus from parent club Atletico Madrid.

The Italian giants have a £30m option to buy the Spanish striker next summer.

But Tottenham could look to snap him up for a similar fee, allowing the club to pour the remainder of the £100m-plus income from Kane into the rest of the squad.

Of course, Morata is infamous for his poor spell at Chelsea between the summer 2017 and January 2019.

Yet the Juve man could well prove a decent replacement for Kane.

On the face of it, the stats make for damning reading.

But in terms of goals per 90 minutes, Morata proves he can find the net with consistency.

In fact, the ex-Real Madrid star averages 0.55 top-flight goals per 90 – better than a goal every two games and not far off Kane’s record of 0.73.

The two strikers have similar shot conversion rates – with Kane (18.1 per cent) narrowly above Morata (17.7 per cent).

So while Tottenham fans may not be thrilled with the idea of swapping Kane for Morata, there’s reason to believe he could do a great job back in the English capital.