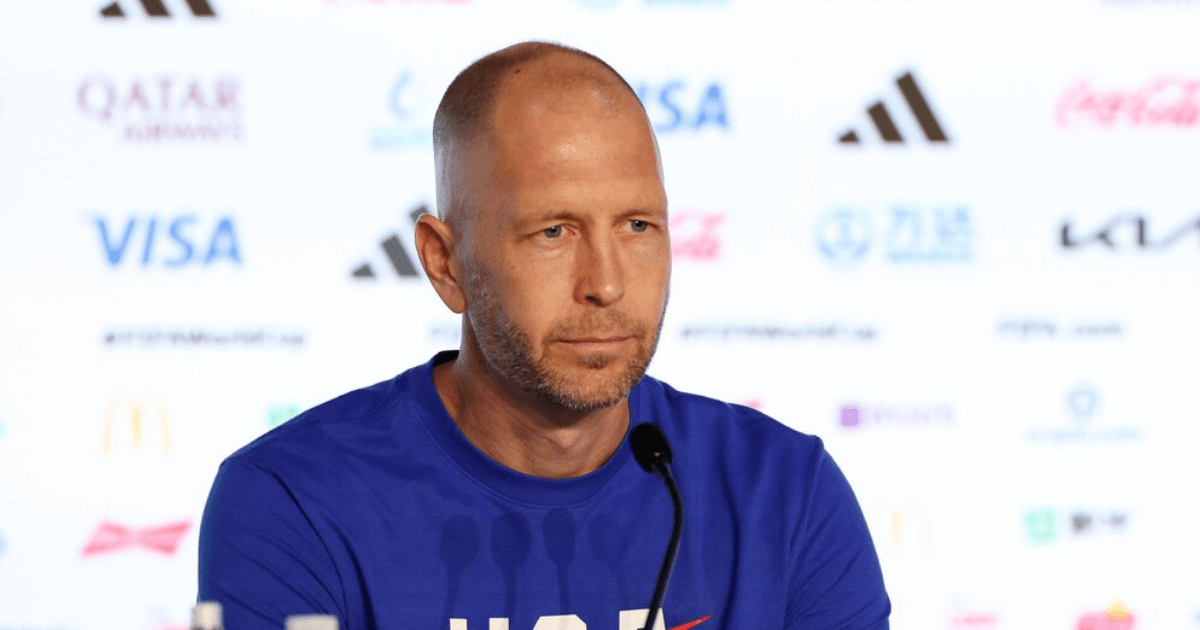 The Reynas were left unhappy by Berhalter’s public comments detailing how an unidentified player was nearly sent home from the US’ Qatar World Cup camp for not meeting expectations on and off the pitch.

Berhalter kicked his now wife, Rosalind, as a teenager at the University of North Carolina in a dispute outside a bar
Claudio and wife Danielle revealed details of the incident to US Soccer with Gio’s mum being the best friend, room-mate and team-mate of Rosalind 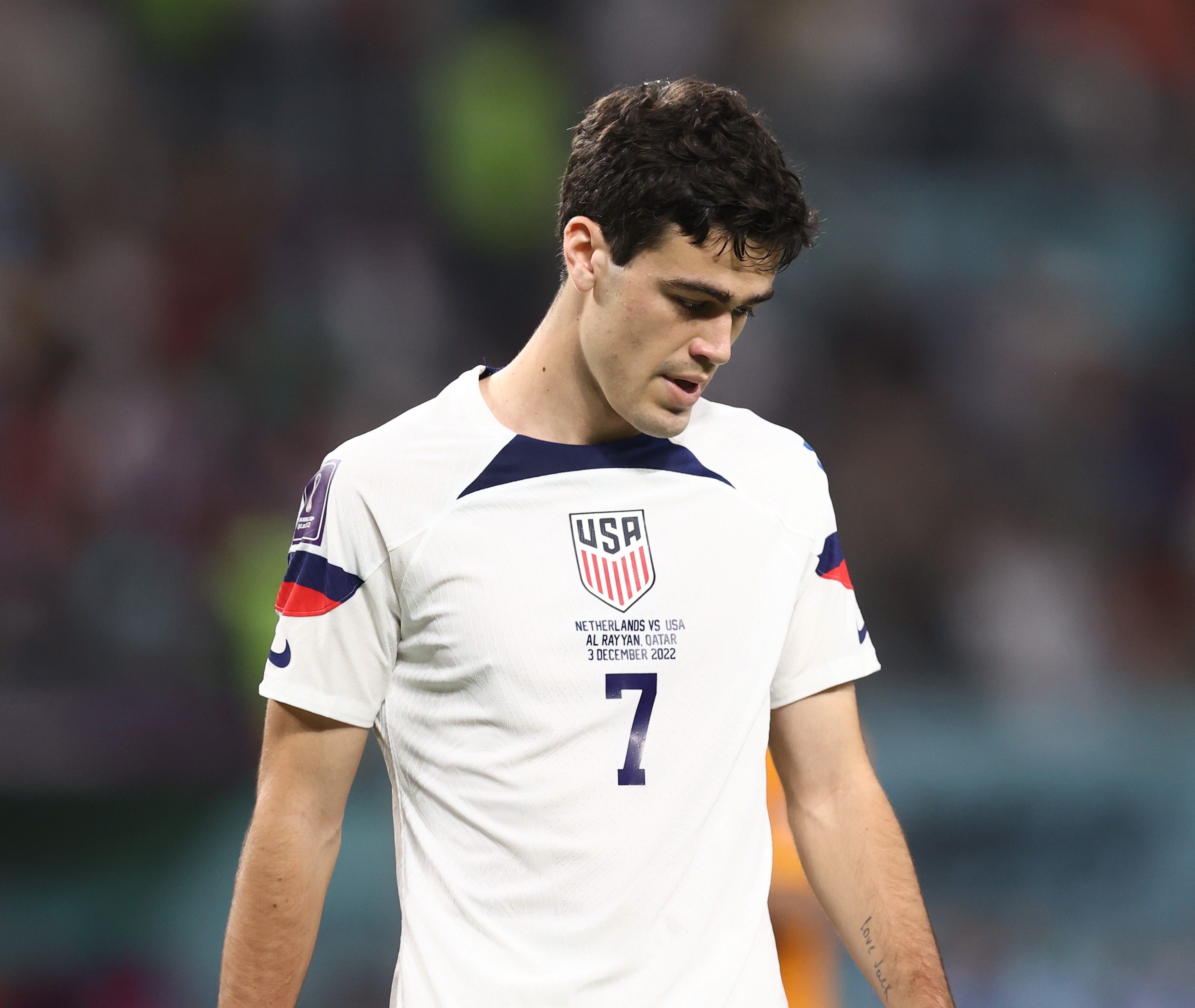 Despite Berhalter not identifying the footie star by name, it was a clear reference to Reyna, and the Borussia Dortmund ace later confirmed it in an Instagram post the next day but faced fierce criticism on social media.

According to ESPN, furious with his former US team-mate and long-time pal over the treatment of his 20-year-old son, dad Claudio threatened to reveal sensitive details about Berhalter’s past to US Soccer executives.

Berhalter and Claudio played together growing up in New Jersey.

Claudio’s father, Miguel, also coached the pair at a young age and the two played high school football together at St. Benedict’s in Newark.

In a call alongside wife Danielle, it was revealed that former US boss Berhalter had a past with domestic violence.

The Reynas have confirmed they revealed details of Berhalter’s altercation with wife and then girlfriend Rosalind outside a local bar as an 18-year-old freshman at the University of North Carolina.

Danielle was a room-mate and team-mate of Rosalind at UNC, and says she supported her “through the trauma that followed”.

They have, however, denied threats were made while sharing their frustrations to US Soccer sporting director Earnie Stewart over their son’s World Cup experience that saw him play just two times.

Danielle said in a statement: “To set the record straight, I did call (U.S. Soccer sporting director) Earnie Stewart on December 11, just after the news broke that Gregg had made negative statements about my son Gio at a leadership conference.

“I have known Earnie for years and consider him to be a close friend.

“I wanted to let him know that I was absolutely outraged and devasted that Gio had been put in such a terrible position, and that I felt very personally betrayed by the actions of someone my family had considered a friend for decades.

“As part of that conversation, I told Earnie that I thought it was especially unfair that Gio, who had apologized for acting immaturely about his playing time, was still being dragged through the mud when Gregg had asked for and received forgiveness for doing something so much worse at the same age.

“Without going into detail, the statements from yesterday significantly minimize the abuse on the night in question.

“Rosalind Berhalter was my roommate, teammate and best friend, and I supported her through the trauma that followed.

“It took a long time for me to forgive and accept Gregg afterward, but I worked hard to give him grace, and ultimately made both of them and their kids a huge part of my family’s life.

“I would have wanted and expected him to give the same grace to Gio. This is why the current situation is so very hurtful and hard.”

The statement continued: “At the time I called Earnie, many people were trashing Gio on social media due to Gregg’s comments, and I didn’t know when or if this would stop.

“I just wanted Earnie to help make sure that there would be no further unwarranted attacks on my son.

“I thought our conversation would remain in confidence, and it didn’t occur to me at the time that anything I said could lead to an investigation. I’m not criticizing Earnie here.

“I very much commend the recent efforts by U.S. Soccer to address abuse of women players, and I understand now he had an obligation to investigate what I shared.

“But I want to be very clear that I did not ask for Gregg to be fired, I did not make any threats, and I don’t know anything about any blackmail attempts, nor have I ever had any discussions about anyone else on Gregg’s staff—I don’t know any of the other coaches. I did not communicate with anyone in U.S. Soccer about this matter before December 11, and no one else in my family has made any statements to U.S. Soccer regarding Gregg’s past at all.

“I’m sorry that this information became public, and I regret that I played a role in something that could reopen wounds from the past.”

Claudio, a Hall of Famer who captained the US at two World Cups, issued a statement to The Athletic which read: “I support my wife, Danielle, and her statement.

“I too was upset by Gregg’s comments about Gio after the U.S. was out of the World Cup, and I also appealed to Earnie Stewart on December 11 asking him to prevent any additional comments.

“While in Qatar, I shared my frustrations about my son’s World Cup experience with a number of close friends, Earnie and Brian McBride among them.

“However, at no time did I ever threaten anyone, nor would I ever do so.”

Berhalter has since confirmed the altercation with Rosalind – his wife of 25 years and the mother to his four children – as a teenager and says “there are zero excuses” for his actions.

The ex-Crystal Palace defender has also confirmed that the authorities were never involved and that he sought help after the incident.

In a lengthy Twitter post, Berhalter said: “During the World Cup an individual contacted U.S. Soccer, saying that they had information about me that would ‘take me down’ – an apparent effort to leverage something very personal from long ago to bring about the end of my relationship with U.S. Soccer.

“In the fall of 1991, I met my soulmate. I had just turned 18 and was a freshman in college when I met Rosalind.

“One night, while out drinking at a local bar, Rosalind and I had a heated argument that continued outside. It became physical and I kicked her in the legs.”

Berhalter added: “The lessons learned from that night over three decades ago became the foundation for a loving, devoted, and supportive relationship, which we honored and celebrated with our 25th wedding anniversary this past weekend”

Berhalter’s contract with the US expired on December 31, 2022, following the round of 16 knockout at the hands of Holland.

US Soccer have announced that assistant coach Anthony Hudson will lead the team during a January camp in California.

Despite this, Berhalter says he is “looking forward to continuing my conversations with U.S. Soccer about the future”.