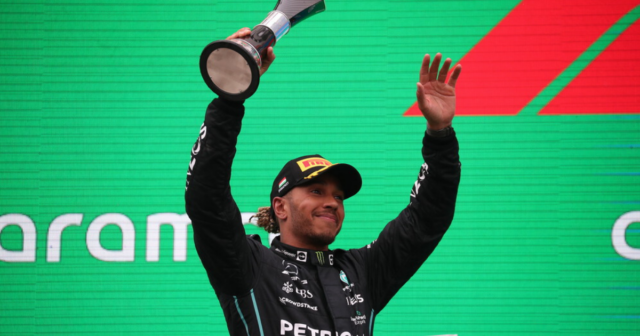 LEWIS HAMILTON has revealed he is considering extending his F1 career beyond next season.

The Mercedes star has a contract until the end of 2023 but has vowed that he is “still on a mission”.

Hamilton has faced two of the most topsy-turvy seasons of his career in recent times.

Last year he locked horns with Max Verstappen in an extraordinarily intense title battle that saw crashes, controversy and drama on the very last lap of the last race of the season.

And this season he has found himself in an uncompetitive Mercedes car which has tested the 37-year-old in all new ways.

But the seven-times world champion has made clear that he’s still up for the fight and could well keep driving beyond 2023.

Hamilton told Vanity Fair: “I’ll be lying if I said that I hadn’t thought about extending.

“I’m still on the mission, I’m still loving driving, I’m still being challenged by it.

“So I don’t really feel like I have to give it up any time soon.

“I’m built different. I mean, I was built for this. It reminds me that people still don’t know me.

“Even after all these years. People still don’t know. So, all right, I’ll prove you wrong again.”

Hamilton also reflected on the heartbreak of last year, when Max Verstappen overtook him on the final lap at Abu Dhabi to take the World Championship.

The moment was mired in controversy after the now departed race director Michael Masi was found to have not followed race procedure correctly, leading to the final lap shoot-out.

Hamilton said: “I don’t know if I can really put into words the feeling that I had. I do remember just sitting there just in disbelief.

“And it was one of the toughest moments, I would say, that I’ve had in a long, long time.”

After a difficult start to the season, the Mercedes car has gone from strength to strength and Hamilton has finished on the podium in the last five races.

He is now enjoying some well-earned time off during the F1 season break – and keeping himself busy in interesting ways.

Not long after being pictured riding an electric jet surfboard, the star arrived in Africa to trace his roots.