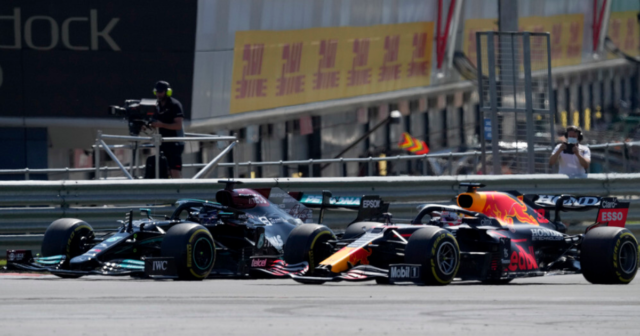 LEWIS HAMILTON has had a pop at Max Verstappen following the weekend’s dramatic British Grand Prix.

Mercedes star Hamilton claimed a gutsy third after a run that included an exciting battle with fourth-placed Ferrari’s Charles Leclerc.

The front-row pair tangled on lap one at Copse and the race was red-flagged after Verstappen crashed into the barrier.

Hamilton recovered to win but Verstappen did not finish in what would prove an interesting chapter in their epic season-long battle.

This time around the British legend had a tight wheel-to-wheel duel with Monaco-ace Leclerc but both managed to cross the finish line, with Verstappen back in seventh.

He told told Sky Sports: “Charles did a great job – what a great battle.

“He is a great driver, and this was clearly a lot different to what I experienced last year.

“Copse for example – the two of us went through no problem.”

Barbed comments between seven-time world champion Hamilton and current-man-to-beat Verstappen and their teams are nothing new.

Bad blood is clearly still there after Verstappen pipped Hamilton to the title on the final lap of the final race last year after a controversial in-race safety car call that later saw race director Michael Masi sacked.

Advertisement. Scroll to continue reading.
In this article:britishgrandprix, lewishamilton, maxverstappen