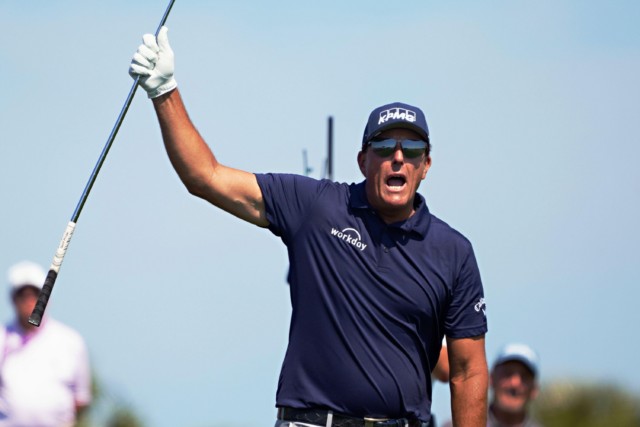 PHIL MICKELSON is practically guaranteed another $8million (£5.7m) pay day, even if he does not hit another decent shot all year.

That is the top pay-out from the PGA Tour’s $40m fund for players who move the needle most – by generating social media hits, boosting their own popularity, and providing positive publicity for their sponsors.

Mickelson could almost have drawn up that checklist for the new Player Impact Programme himself.

The feel-good factor that accompanied his triumph at Kiawah Island last month, when he became the oldest Major champion of all time – he will be 51 tomorrow – has confirmed Fearless Phil as the game’s biggest mover and shaker.

That position is normally held by Tiger Woods. But the 19 time Major champion will not play again this year as he battles the career-threatening injuries he suffered in a car crash in February.

Bryson DeChambeau and Brooks Koepka have thrown their hats in the ring with their bad-tempered feud, but it looks as if they are fighting for second place.

Throw in Mickleson’s celebrity sitdowns with celebrities such as Clint Eastwood – the so-called Phireside with Phil chats – and the PGA Tour might as well start writing his name on that $8million cheque right now.

We all know how much Mickelson loves money – think back to the pictures of him drooling over the $9million he won for beating Tiger Woods in their winner-takes-all battle three years ago, and the dodgy share dealings that have seen him accused of insider-trading.

But there is no doubt he would give up every cent of his future earnings for victory in this week’s US Open, the one Major he needs to become only the sixth player to complete the career Grand Slam.

The big question on everyone’s lips at Torrey Pines is can lightning strike twice?

Can a 51 year old Mickelson really add to his stunning USPGA win, especially with all the scar tissue left by SIX runner-up finishes in the US Open?

Mickelson clearly thinks so, although he admits he could just as easily fall flat on his face – just as he did with the most famous of his second places, when he double bogeyed the final hole in 2006 to hand Geoff Ogilvy a one shot victory.

He summed up what everyone else was thinking, with this brutally honest verdict: “I still am in shock. I just can’t believe I did that. I’m such an idiot.”

Mickelson grinned when he was asked if he had banished the tendency to play like an idiot when the US Open is on the line.

He replied: “No, after 35 years of that, like it’s just not going to go away.

“But what I do think is this. One of two things are going to happen: Either that’s going to be my last win and I’m going to have one of the most cherished victories of my career to look back on and cherish for a long time.

“Or I may have kind of found a little something that helps me stay a little bit more in the present, helps me focus throughout four rounds, and maybe I can execute and play golf at the highest level for a nice extended period of time now.

“The bottom line is I know that I’m playing well and this could very well be my last really good opportunity to win a US Open. So I’m going to put everything I have into it.” 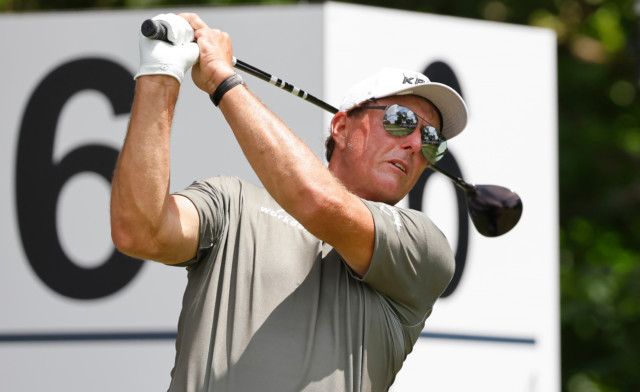 Mickelson is now bidding for US Open glory

It could not happen at a more fitting venue. Mickelson was born in San Diego, a few miles from Torrey Pines, and has won three PGA Tour events on his home course.

But the last time was twenty years ago, and he admits that he has struggled at Torrey since it underwent a major re-design shortly after his third win.

He added: “Since the re-do I have not played that course anywhere near as well as I would like to.

“I’ve tried to force it. A lot of pins you can’t go to. You have to play 50-60 feet away, and a lot of holes I get overly aggressive, obviously that’s my nature.

“It was almost like I was trying a little too hard. I wasn’t just calm enough to let it happen. I was a little bit antsy. What would be the word? Unsettled would be the word. Like I just couldn’t quite get calmed down and in the right frame of mind.

“There’s a proper way to play the course. I’ve seen it, and I want to have the discipline to do it. So I’ve spent most of the last two weeks here, while the course was closed for public play, practising hard out there to develop a good game plan.

“I figure if I can feel comfortable on the tee, I’m going to give myself a great chance this week.”