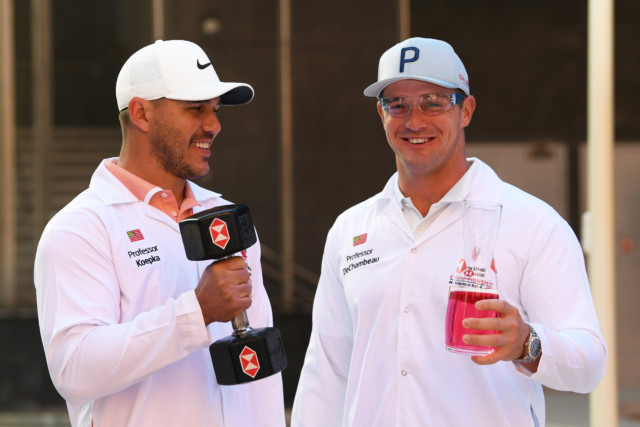 GOLF is often touted as an eloquent gentleman’s sport, perfect for the rich, famous and the relaxed.

But every so often, as it does in all sport, rivalry creeps in, and that’s certainly the case with PGA Tour pros Bryan DeChambeau and Brooks Koepka.

The pair have had their fair share of run-ins over the years and the feud continued at the recent PGA Championship, which was won by Phil Mickelson.

Why do Bryson DeChambeau and Brooks Koepka hate each other?

Their feud stems all the way back to 2018, when Koepka criticised how slow DeChambeau was playing.

“I just don’t understand how it takes a minute and 20 seconds, a minute and 15 to hit a golf ball; it’s not that hard,” Koepka said at the time.

DeChambeau hit back by digging at Koepka’s physique, claiming he didn’t have any abs.

Koepka, however, used that as an opportunity to chime back at DeChambeau with a quip of his own.

“You were right @b_dechambeau, I am 2 short of a 6 pack,” he wrote on Twitter alongside a picture of his four golf Majors trophies.

You were right @b_dechambeau I am 2 short of a 6 pack! pic.twitter.com/aCJ1jimId6

The pair then rattled each other again at USPGA Championship last month.

Koepka had been taking part in an interview when DeChambeau walked behind his foe and made a sarcastic comment about the 31-year-old, who rolled his eyes in response.

Koepka then said: “I’ve f*ing lost my train of thought hearing that bulls**t.”

It was then announced that DeChambeau would be partnering up with NFL star Aaron Rodgers to take part in a charity match against Phil Mickelson and Tom Brady.

DeChambeau, quick to reply as ever, replied: “@BKoepka It’s nice to be living rent free inside your head!”.

@BKoepka It’s nice to be living rent free in your head!

The duo, however, could soon be forced to work together as US Open bosses are said to be planning to pair Koepka and DeChambeau up for the US Open.