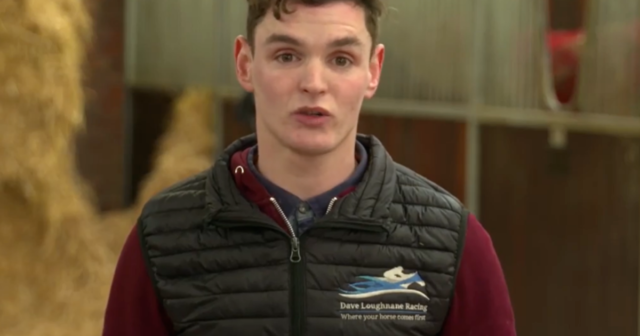 AN award-winning racehorse trainer who received his trophy from Michael Owen has been sentenced to nine months in prison for burglary.

Adrian Stewart, believed to be 33, was found hiding behind the sofa as cops came to arrest him.

And he was foiled by his own glove in another disastrous burglary attempt.

Leeds Crown Court heard how in the early hours of April 11 this year a homeowner was alerted to Stewart in his kitchen.

The court was told the man shouted at Stewart to get out and, as he fled, left behind a glove.

Police were called and minutes later, after a search of the property, found a drunk Stewart in a nearby road with bottles of alcohol.

That alcohol had been stolen sometime earlier from a garden bar at a nearby property in Wakefield, Leeds, report the Yorkshire Evening Post.

During the same raid a car was broken into and a pair of gloves stolen.

The glove found in the homeowner’s kitchen – which matched a description of those stolen from the car – contained Stewart’s DNA.

The Post reported that Stewart, from Leeds, was already on bail when they linked him to both crimes.

Police traced him to a property in Holbeck, near Elland Road, and used a saw to gain entry only to find Stewart hiding behind a sofa.

He pleaded guilty to burglary and attempted burglary.

Stewart had previously spent time behind bars for drug dealing and dangerous driving before turning his life around.

England hero Owen and ITV presenter Ed Chamberlin presented Stewart with the David Nicholson Newcomer Award at a ceremony in London in 2018.

He had been working with renowned trainer David Loughnane but returned to West Yorkshire after his relationship broke down.

Mitigating for Stewart, Craig Sutcliffe told the court: “He began using drink and drugs to try and stabilise himself.

“But since this case has been awaiting court, he has re-established with his partner, and for him to return to Shropshire and return to the riding community.”

Sentencing Stewart to nine months, Recorder Catherine Silverton said: “You have a long record of offending going back to 2004, but very little from 2011 onwards.

“You had a difficult background, but you showed you were capable of turning yourself around. You found your niche and carved out a good career.

“You are at a crossroads in your life. You have taken the wrong turn and if you continue to go down this road, you will be looking at a considerably longer sentence than this.

“If you resume your employment and do not trouble the court again, you are looking at a brighter future.”

Loughnane previously labelled Stewart an ‘exceptional horseman’ who had major responsibility for looking after the horses in his yard.