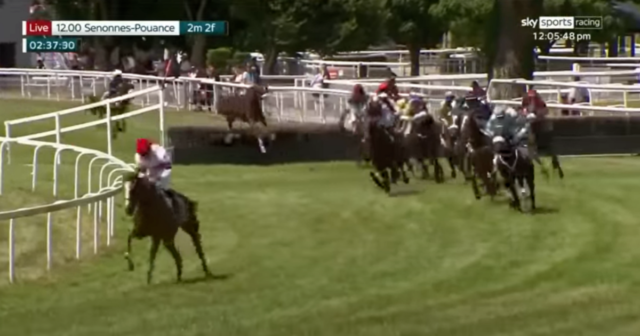 THIS is the ‘ridiculous’ horse race which sparked a flurry of punter comments – after a 9-1 shot turned into ‘one of the easiest winners you’ll ever see’.

Four-year-old Farseer and jockey Gwen Richard were runaway winners of a 2m2f chase at Senonnes-Pouance racecourse in France.

Wow! They don't get much easier than that 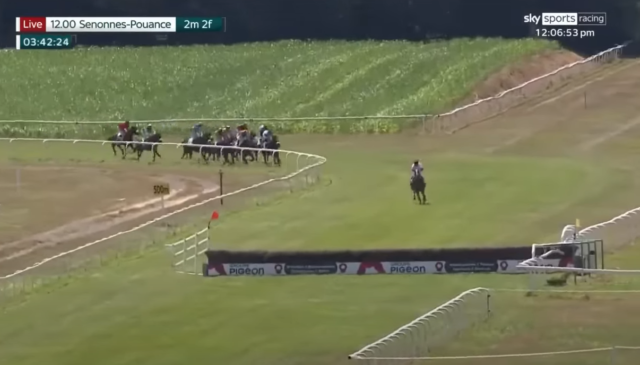 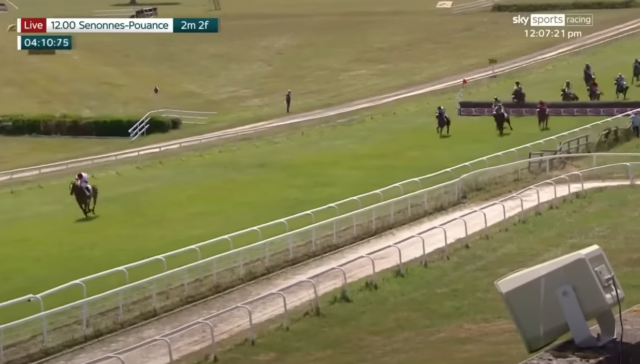 The horse extended his margin to laughable degree, winning the race with ease

The duo looked to be travelling very smoothly half-way through the race and had already established a big lead.

The camera could not pan out wide enough to pick up Farseer as the commentator said ‘hopefully we see him at some point’.

Often what happens in a race like this is the leader has gone off way too fast and used up all their energy near the end.

But turning the bend for home and with two jumps left Farseer was a good 20 lengths in front.

While a couple of jockeys behind rid their mounts forcefully, the rest seemed to have admitted defeat.

So instead of being challenged by a late burst from rivals, Richard could afford to nonchalantly check over his shoulder after jumping the last and win eased down.

The spectacle made for an eye-catching run and was great if you backed them – but some punters were left questioning what exactly was going through the heads of the other jockeys.

Especially as there have been a few cases of uncontested leads in recent weeks.

One punter responding to a video of the race across the Channel said: “Absolutely beyond a joke. This is happening far too much.

“They let them build such a lead they just can’t peg them back and can’t get near them.”

While another wrote on Facebook: “That’s what happens when jockeys use the ‘they’ll come back to us’ theory.”

Another social media user wrote: “I can almost hear that frontrunner giggling their way round the course, that is fabulous to see.”

While one joked: “JP McManus has already bought him for next year’s Grand National.”

Jockeys’ tactics have been in the spotlight recently, especially after a load of apprentice riders suffered a collective nightmare at Nottingham.

While one jockey was banned after riding a 50-1 winner who was given an ‘uncontested lead’.

Punters also recently slammed a ‘pointless’ race where a 1-66 shot beat just one other horse at Brighton.