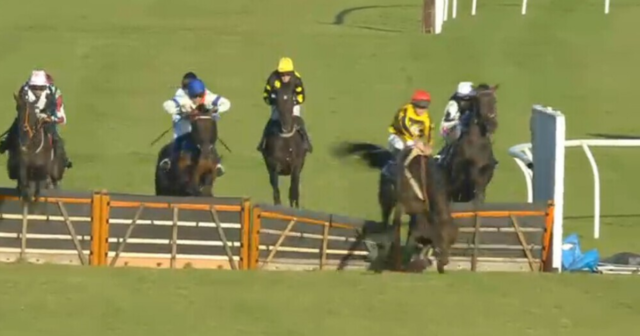 THIS chaotic horse race ended in disaster for two runners when the leader caused carnage after being ‘blinded by the sun’. 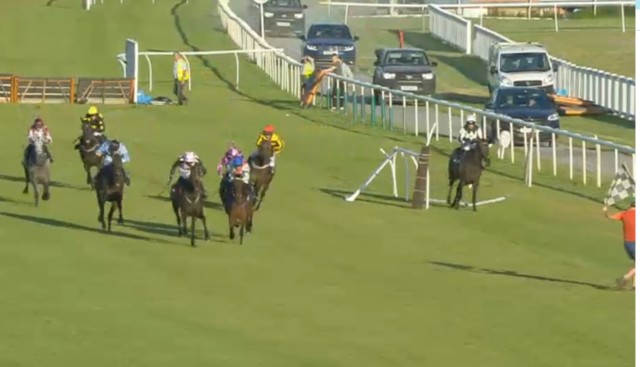 Kalma was carried out of the race by Howdilyoudo, who left a trail of destruction behind

But with the race taking place at 8pm, the setting sun played havoc with his mount’s vision.

Howdilyoudo clattered into the final hurdle after veering sharply left under the glare.

With Sheehan unable to bring his horse under control the runner kept going off track and banged into Kalma.

Tom Scudamore was helpless to stop his mount running wide, smashing through the plastic rail.

Kalma had been challenging for the lead until that point, when the contact carried him out of the race.

Howdilyoudo, trained by Jamie Snowden, was quickly pulled up and fortunately it appeared both horses and jockeys were OK after the flashpoint.

But Snowden was left questioning the stewards’ decision to omit the final flight only.

He posted a photo of Howdilyoudo crashing through the hurdle and wrote: “Howdilyoudo leads over the final flight but is blinded by the sun and dives into it.

“Lucky to stand up, but should the hurdles have been dolled off?

“They were in the race before and the race after!”

The drama didn’t stop there however as Isthebaropen nearly ran down the wrong track on the short run-in.

William Shanahan had to use all his strength to yank his runner left and over the line for fourth.

The eventful race was won by 18-1 Catchmeifyoucan, who recorded her first victory in a year.

Advertisement. Scroll to continue reading.
In this article:fortwo, horserace, theleader