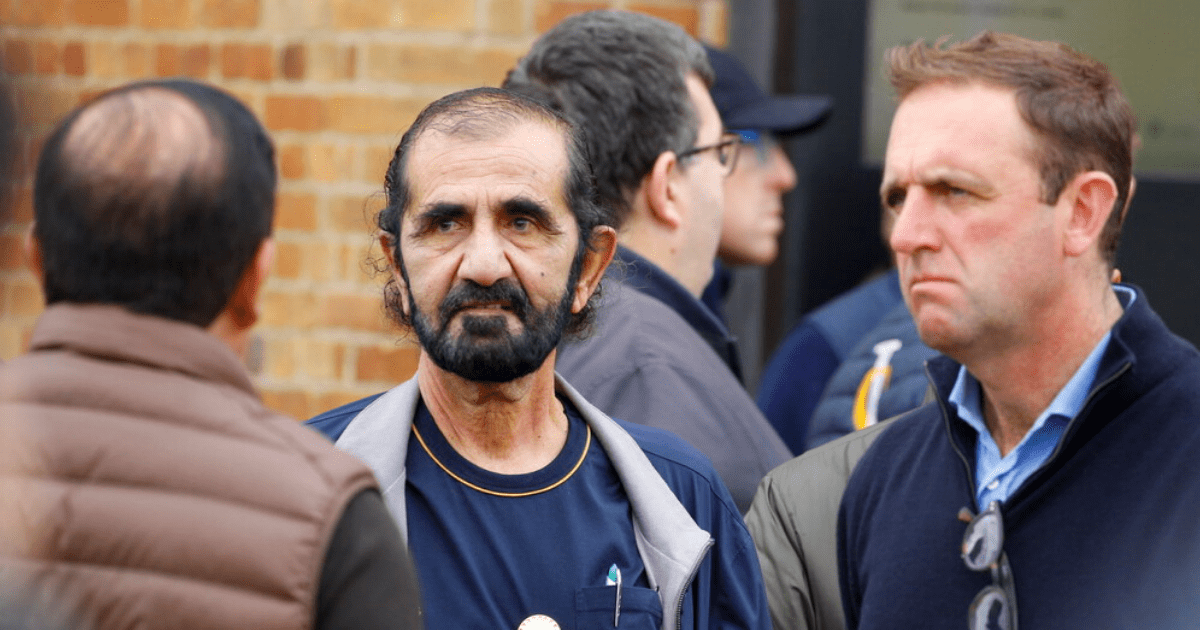 THE billionaire ruler of Dubai made a rare public appearance to spend millions on the ‘Erling Haaland of the stallion world’.

Sheikh Mohammed, 73, was pictured at Tattersalls sales in Newmarket on Tuesday.

The Sheikh appeared in good spirits at the Tattersalls Yearling sales

Alongside son Fazza – who counts Cristiano Ronaldo and Khabib Nurmagomedov among his friends – the ruler was quick out the gates with some mega-money purchases.

The racing operation the Sheikh runs, Godolphin, is one of, if not the biggest, in the world.

And much like top football clubs, keeping it there requires serious investment.

Funny, then, that the horse Sheikh Mohammed spent the most on has been dubbed the ‘Erling Haaland of the stallion world’.

Dubawi is probably Godolphin’s most famous horse and he charges £250,000 to cover a single mare at Dalham Hall Stud.

His progeny go for huge money because they are expected to be brilliant.

And the cash changing hands proved significant straight off the bat at the Yearling sale as Sheikh Mohammed authorised the £1.3million payment for a filly by Dubawi.

Next was a £1.5m splurge on a colt by Dubawi out of Ring The Bell, who herself was by Galileo, the sire of all sires and worth £1billion at his death last year.

Godolphin then spent another million on another Dubawi offspring to bring the total to just under £4m.

The report on Racing TV read the sales were ‘a notable hat-trick for the Erling Haaland of the stallion world’.

In all, Sheikh Mohammed was responsible for spending more than £6m on eight new recruits during the day.

Mind you, it’s a small drop in the ocean for one of the world’s richest men.

And it’s not as if his top class horses don’t pay him back on the racecourse.

In Britain alone this season, Godolphin horses have earned £6.7m.

Trained almost exclusively by Charlie Appleby and with top jockey William Buick riding them, you can expect a lot more to be added to that figure before the season is out.

There is Champions Day at Ascot coming up, then the Breeders’ Cup in America.

Check out Newmarket racecourse on any given day and you’ll likely see a hot couple of Godolphin two-year-olds tearing it up.

That will be the case this weekend too, with Naval Power running in the Dewhurst on Saturday.

Although don’t necessarily expect the Sheikh to be there to see it.

He hasn’t been spotted at a racecourse all season, despite enjoying huge wins such as Coroebus and Native Trail finishing 1-2 in the 2000 Guineas.

In fact, Sheikh Mohammed has rarely been seen in the UK since news of massive divorce – thought to be the most expensive in British history – hit the headlines, despite his £200m property empire here.

He appears to have spent most of his time in his native Dubai since then.

It could be worse though, at least he can relax on his astonishing £300m superyacht.

Day 1 at #TattsOctober Book 1 set the tone for Europe's premier yearling sale…@GinaBryce runs through the highlights from the opening session, with a trio of Dubawi yearlings selling for 1,000,000gns or more. pic.twitter.com/9RJeJ8F67Q

Did you miss our previous article…
https://www.sportingexcitement.com/horse-racing/king-charles-has-his-first-winner-as-just-fine-carries-royal-silks-home-in-front-at-leicester/