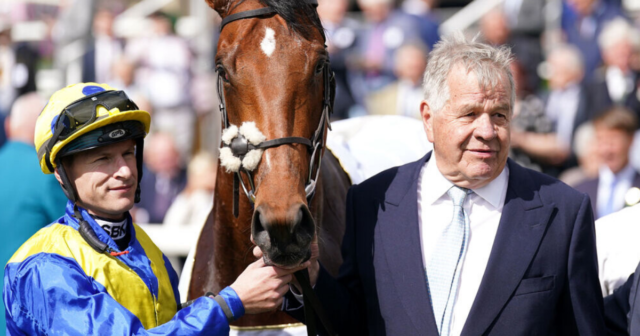 SIR MICHAEL STOUTE is back and he is coming for racing’s Crown jewel.

The legendary trainer, who has endured some lean years over the past decade, could finally have another Derby horse on his hands in .

Sir Michael Stoute will be chasing his first Derby win in

The unbeaten colt stamped his class all over the Dante Stakes and is now the clear 2-1 favourite for next month’s Epsom Classic.

At times throughout his career, winning the Derby was like shelling peas to 76-year-old Stoute.

He bagged the race three times in seven years in the early 2000’s – but he hasn’t even had a horse finish in the frame since 2011.

But Desert Crown has Derby contender written all over him, and he put some smart horses to the sword with ease at York.

And Stoute revealed the horse, who won by three and a quarter lengths, was barely race-fit.

He said: “I was cautious coming in as he had a hold up and we only just got him ready for the race.

“He has an excellent temperament and I was pleased with that. He was very smooth.

“I would be hopeful that the longer trip at Epsom would be fine and he should improve for that.”

The Crown looks good on jockey Richard Kingscote, who wouldn’t be a regular at the top table.

He has only ridden in the Derby once, in 2018 aboard the straggler Knight To Behold, but he was playing it cool after the race.

He said: “Of course it’s a privilege to go to the Derby on a horse with a big chance but I’m not getting carried away.”

Coral initially made Desert Crown 3-1 (from 6-1) but punters waded in.

David Stevens said: “We weren’t as impressed as some bookmakers following Desert Crown’s Dante win, and went a standout 3-1 for the Cazoo Derby and kept Stone Age as favourite.

“But punters disagreed, and the pair have now swapped places at the head of the Epsom betting.”