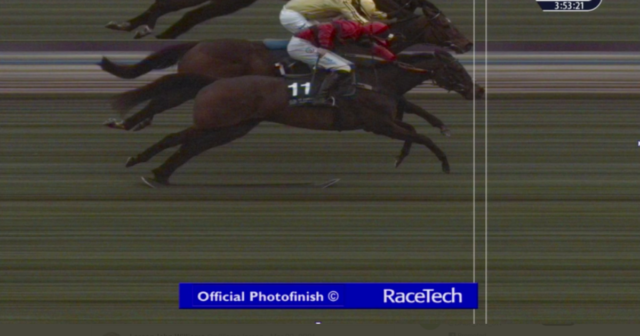 A FORGOTTEN Cheltenham Festival hero who rarely races is going under the radar again in his bid to defend his title.

Porlock Bay landed the £20,000 prize in a dramatic photo finish

John Studd’s 11-year-old saw off Willie Mullins’ Billaway in the 3m2½f contest by a short head.

The pair pulled some 13 lengths clear of third-placed Staker Wallace, with a whopping eight horses pulled up in a real war of attrition.

Porlock Bay has raced just once since, in a low-key point-to-point at Chaddesley Corbett racecourse in Worcester last December.

He has been declared to race at Bangor on Friday, in a 3m Hunters’ Chase where the winner will get £1,540.

Porlock Bay netted £21,114 for his owner at the Festival last year.

The horse ran in one race under rules in Britain before his upset on the biggest stage of all, coming second in a Class 6 contest at Wincanton.

And it looks like a similar route to victory is being planned this time with the Bangor run.

Lorcan Williams was in the saddle for the Festival win last year because amateur jockeys were banned due to Covid restrictions.

But regular rider Will Biddick – who is booked to ride on Friday – could get the leg up this year with restrictions easing.

Porlock Bay’s covert return to action has not gone totally unnoticed by punters.

The horse has been backed from 8-1 to 7-1 with Paddy Power in their non-runner no bet market for the Cheltenham race.

While with SkyBet he has quietly gone from 10s into 9s.

Old rival Billaway heads the market at around 9-2, but he was a disappointing 12-length second to Winged Leader when last seen at Thurles last month.

"I was in bits watching that."@william_biddick would have ridden Porlock Bay if Covid-19 restrictions had not prevented amateurs riding at this year's #CheltenhamFestival

However, he still basks in the glory of training the winner of the Hunters' Chase

Did you miss our previous article…
https://www.sportingexcitement.com/horse-racing/jockey-airlifted-to-hospital-after-horror-fall-poses-in-hospital-bed-selfie-with-awful-injuries-and-wires-everywhere