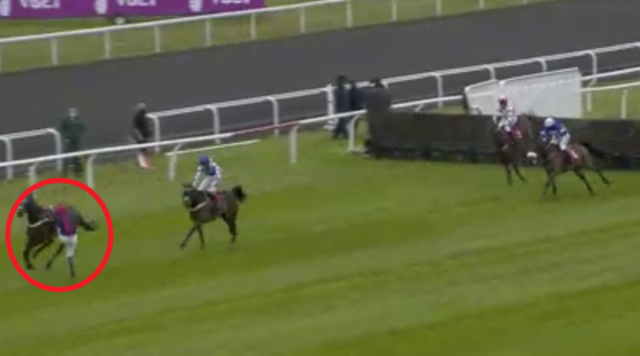 A HORSE who lost a race in a ‘stupid’ incident that cost punters £10,000 is to be sent straight to the sales, trainer Nicky Henderson confirmed.

Versatility looked to have the 3pm at Kempton sewn up after clearing the final fence in the lead under top jockey Nico de Boinville.

But the horse’s head dipped and he lost balance on the run-in, unseating De Boinville and leaving it free for 6-1 Psychedelic Rock to win.

A whopping £10,000 was matched on the Betfair Exchange on Versatility, who was a virtual certainty at 1.01.

But you never know what will happen in racing and so it proved with the shock result.

Legendary trainer Henderson slammed the ‘stupid’ flashpoint and said the seven-year-old horse is going to be sold.

He told the Racing Post: “That was just annoying, it was stupid.

“I hoped with the new season starting we could avoid things like that!

“He’s going to the sales soon and at least he hasn’t done his sales pitch any harm because he’s shown what he can do.”

Versatility has won more than £18,000 during a 13-race career, with his most recent win coming at Ludlow in November last year.

Henderson confirmed the horse is going to the sales

He was a 4-1 shot that day and triumphed handsomely under De Boinville, who has been in the saddle for the horse’s past eight runs.

Punters clearly though he was going to do so again by ploughing mega cash into him on the exchange.

But a total of £10,037 went back to the bookies after the seemingly impossible unseating.

The exchange allows punters to bet in-running, and it was in Ireland that the exact opposite of Versatility’s downfall occurred.

There, at the Curragh racecourse, Pretty Rebel flew home at monster in-running odds of 999-1.

One lucky punter managed to get £2 on at that whopping price.

The horse completely missed the break and fell out of the stalls in the 4.55 Apprentice Handicap.

But amazingly jockey Dean Curran got the horse going and guided it home to an against-all-odds upset.