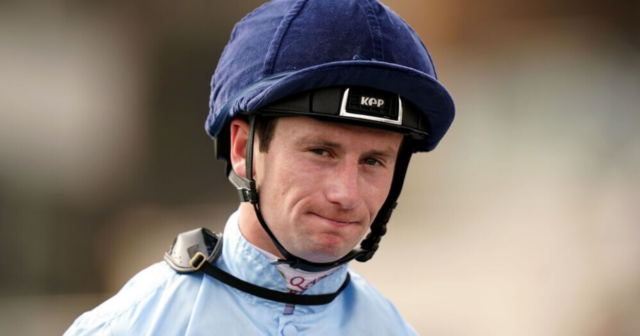 IT’S time for the word ‘whip’ to be obliterated from racing’s unique language – and champion jockey Oisin Murphy agrees.

In its place, every racing professional should acknowledge the new term ‘Pro Cush Encourager’, shortened to just ‘Pro Cush’ or ‘Encourager’.

Some will immediately say it’s just trying to fob people off. A whip is a whip.

But that’s exactly the point. The general impression of a whip is not a ‘Pro Cush’ or an ‘Encourager’.

Murphy told me: “I encourage children to hold my pro cush when taking photos, and they always do.

“I want them to realise that it’s a lightweight tool vital to us riders.

“They love it and the children’s parents never disapprove.”

I write this column as a huge advocate of the ‘encourager’, which I believe is crucial for the Sport of Kings. Indeed, I have been part of a crew who lobbied in Parliament over the matter.

But the time has come for language to alter. For some of you it will be unnecessary or fit uneasily. But crucially in time, for generations to come, the ‘Pro Cush’ will be all they will have known.

This change has to come from everyone – officials, trainers, jockeys, broadcasters, writers and owners. And it has to happen unanimously in one swoop. From top to bottom.

The word whip must go. As, naturally, must ‘persuader’ or ‘shillelaghs’. On a personal note I’m gutted about that as they are great words. But I’m about the bigger picture here, it’s not about me.

Jockeys in interviews must no longer use words like “hit”, “slap”, “crack”, “strike”, “backhander” or “smack”. Those terms can easily disappear.

Every jockey is trying to encourage their horse. Simples. After all, that is what they actually are trying to do! The Professional Jockeys’ Association need to hammer this home to members.

Of course, the BHA is in the middle of what is describes as an open, public consultation on the use of the whip in British racing.

The consultation was a recommendation of the industry’s independently-chaired Horse Welfare Board (HWB), which was asked to consider the whip as part of its five-year strategic plan for the welfare of horses bred for racing.

If the powers that be do one thing, they should take up my idea. But I have little hope.

Remember the same powers that be introduced the idea of limiting riders to a certain amount of strikes of the encourager. Anyone who thinks one rule can cover all jockeys is simply crackers.

One person’s encourager use is totally different to another. In other words, one jockey could encourage a horse a dozen times with very little force, another once with a lot of force. Every jockey’s whip use should be judged individually. But that’s another matter!

Racing should listen to me here. But everyone has to act at once. A unanimous decision to the benefit of all of us.

The Scottish showpiece has long been one of those sprint nightmares every punter loves to sort out, and some terrific horses have landed the prize including Lochsong, Coastal Bluff, Bahamian Pirate, Continent, Regal Parade and Brando.

Like so many handicaps, it’s a very different race in the modern era, with only about a stone between top and bottom weight.

You won’t get a Famous Star scoring, who landed the prize in 1982 as a three-year-old off 7st 7lb!

As always the draw will play a major part, and if low have an advantage then there’s every chance likely market leader Great Ambassador will become the fourth favourite to score in seven years.

That said, I’m aiming high with the ultra consistent BIELSA who goes for Kevin Ryan and Kevin Stott.

Bielsa has been higher in the handicap in his time, but doesn’t really have anything in hand which is annoying.

What he does have is consistent form in these events, including a fifth in a big-field handicap at York, a second at Haydock, an eighth in the Buckingham Palace and sixth in the Stewards’ Cup. A furlong out he’ll have every chance.

I’ll just have to pray a high draw is not a disadvantage, and Stott gets the Pro Cush out close home and encourages my boy to the winner’s enclosure.

Did you miss our previous article…
https://www.sportingexcitement.com/horse-racing/meet-newest-trainer-in-the-north-who-at-just-28-is-hoping-to-break-300000-mark-for-the-season-with-stars-at-newbury