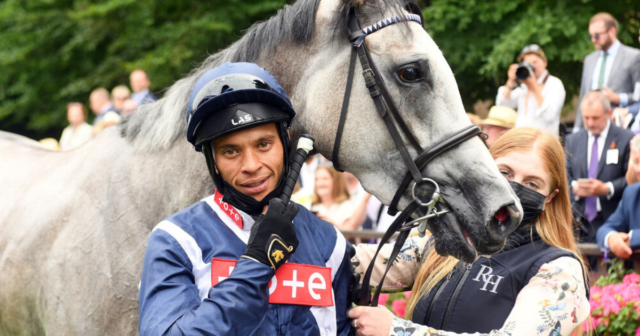 JOCKEY Sean Levey was banned moments after winning £122,000 in a race that left a rival trainer in tears.

Top rider Levey’s emotionally charged victory on Snow Lantern in the big race at Newmarket last Friday was a blinder.

Levey was a brilliant winner on Snow Lantern, but unfortunately picked up a ban after claiming £122,000 in the Group 1 race at Newmarket
Jarvis shed tears of frustration after seeing his horse Lady Bowthorpe finish fourth

Levey rode the Richard Hannon-trained Snow Lantern to victory in the Group 1 contest eight years after her dam, Sky Lantern, was denied on the line in the same race.

It was another top win for Levey, who has bagged just under £5.2million in the past five seasons.

However, he was hit with a six-day ban for ‘careless riding’ after stewards studied the post-race replay.

In an action-packed contest, six horses including the winner were involved in mid-race controversy.

Stewards determined that as a result of Levey’s riding, one horse was ‘carried onto’ another, who in turn forced another to check their run.

Then that forced another horse to be carried off their straight line.

“In the first incident, which the Stewards considered to be accidental, LAVENDER’S BLUE (IRE) shifted slightly left-handed away from the whip before being corrected by Crowley, causing QUEEN POWER (IRE) to be moved slightly off its intended line. 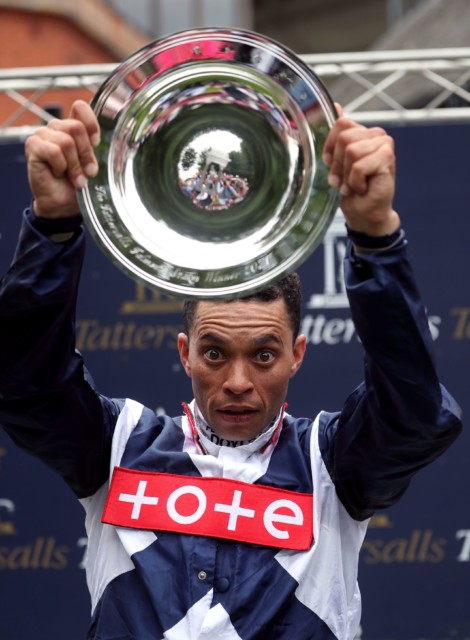 Levey celebrates after scooping £122,000 for connections following his win in the Tattersalls Falmouth Stakes

Snow Lantern strikes in the race in which her dam Sky Lantern was controversially denied and claims victory in the @Tattersalls1766 Falmouth Stakes for @rhannonracing and @LeveySean – what a fantastic race! #JulyFestival pic.twitter.com/Rc4TROUinP

“In the second incident, Levey was suspended for 6 days for careless riding for switching his mount right-handed to continue its run, causing PRIMO BACIO (IRE) to be carried onto SAFFRON BEACH (IRE) which resulted in the rider of CHAMPERS ELYSEES (IRE) having to take a considerable check, and QUEEN POWER (IRE) to be carried of its intended line.”

There was sadness after the race as well as William Jarvis, the trainer of big fancy Lady Bowthorpe, was reduced to tears following his horse’s run.

Lady Bowthorpe, who is owned by music superagent Emma Banks, came from a seemingly impossible spot to grab fourth under Kieran Shoemark.

Jarvis shed tears of frustration when speaking afterwards, although fourth was good enough for £11,550. 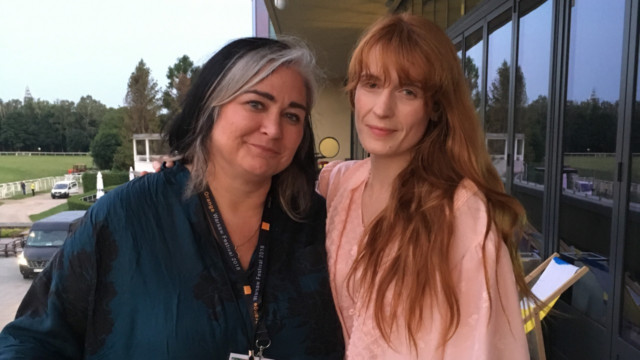 He said: “Lady Bowthorpe was the best filly in the race and she deserves a Group 1, but Kieran said he had a wall of horses in front of him two out and just couldn’t get out.

“She’s an absolute star for us and would have won if it had been nine furlongs today.”

It is not uncommon for winning jockeys to pick up a ban after a race.

William Buick got one after riding a 66-1 winner at Royal Ascot.

However, they tend to be short and even offer jockeys a brief respite in a packed schedule.