Matt Chapman: Christophe Soumillon has been hit with a ridiculously harsh ban, it makes no sense – & who rides Inspiral?
Advertisement 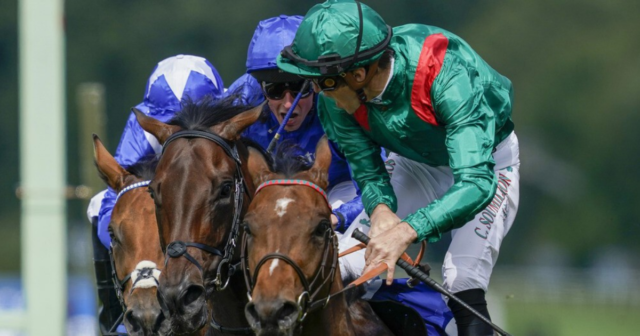 SUPER ‘Soumi’ must appeal one of the most ridiculously harsh bans I have ever seen handed out in British racing.

Belgian gem Christophe Soumillon was banned for 12 days after the Coral-Eclipse at Sandown on Saturday afternoon.

You will be thinking the rider must have carved up the field in a bid to win at all costs. Nope. Nothing like that. Not a sausage of it.

Soumillon gave French raider Vadeni a peach to land the Eclipse, pouncing late to deny Mishriff and Native Trail in a busy finish.

The success clearly meant much, as I was lucky enough to be close to the winning line and Soumillon’s scream of delight could be heard echoing around the grandstand!

It was after the end of the race, though, that Soumillon got in hot water.

During his celebration Vadeni drifted to his right, badly hampering Native Trail who in turn forced James Doyle to snatch up on Lord North.

The winning rider was given a 12-day ban (July 16-27 inclusive) for careless riding.

What absolute nonsense. It beggars belief to be quite frank. Talk about over the top. In a crazy way.

Now don’t get me wrong, racing is a dangerous game and all needs to be done to make it as safe as possible for both jockeys and horses.

But in this instance all that was needed was a strong word in Soumillon’s ear and, possibly, a small ban as a reminder to others not to do something similar.

VERGING ON THE INSANE

But 12 days – nearly two weeks off – for something that was anything but malicous with no influence on the outcome of a race is absurd.

If you compare that with the ten days Paul Hanagan got for carving up the field on The Ridler at Royal Ascot it verges on insane.

Provided his family haven’t already got a lovely holiday booked, Soumillon must appeal and the stewards should lower his ban arguably without a hearing being needed.

Sir Mark Prescott just reminded us he’s still around when the fabuloous Alpinista swooped to conquer in the Grand Prix de Saint-Cloud on Sunday, a race in which last year’s St Leger hero Hurricane Lane was a bitter disappointment.

This was a great win for the ‘sniper’ Luke Morris, who appears to have a genuine Arc hope on his hands.

WHY THE SECRECY OVER INSPIRAL?

That’s big for the rider and just imagine if Prescott bowed out with Arc success.

Speaking of jockeys, why the secrecy over who will ride Inspiral in the Falmouth Stakes at Newmarket on Friday?

The silence has happened due to the so-called split with Frankie Dettori and the Gosden team.

But I have absolutely no idea why who is on top of Inspiral is currently a secret worthy of the FBI!

It’s a jockey on a horse for goodness sake.

Advertisement. Scroll to continue reading.
In this article:everseen, onsaturday, upthefield