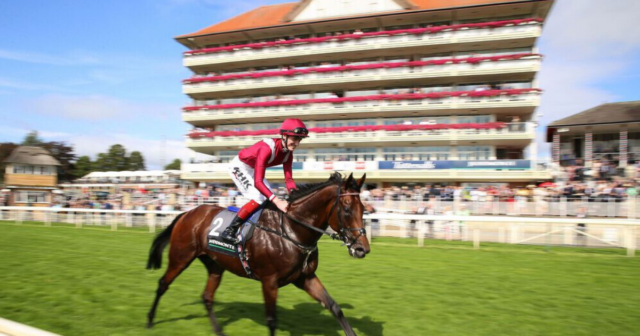 SO which was the best performance at York for you last week? And who would you make the best horse in the world right now?

Answers on a postcard please.

It was a real privilege to work on the Knavesmire for ITV last week and every day there was a nugget of gold or two.

Younger viewers won’t get this, but I’ve done a lot of work on TV and never been anywhere near as good a racecourse as York before.

Things are a bit different now, with Chester and soon Newbury to have joined Sky Sports Racing, but back in the day I went to Ireland for Grade 1 performances.

Now I enjoy the best of all worlds, and I don’t take that lightly.

To be able to speak to John Gosden after he’s just landed the Juddmonte International and Johnny Murtagh after the Sky Bet Ebor is something truly special. The stuff of dreams.

But back to the original question?

Who did most at work last week to excite?

Well for me it has to be a photo finish between Mishriff and Snowfall, and while the latter gets my juices going more, I think Mishriff probably did more in his performance.

It was his greatest performance and could easily make him the best in the world depending on whether you go for one sparking effort or longevity of continued high class romps.

Snowfall is more dazzling, have spreadeagled fields all season.

It’s always harder for fillies to get high ratings due to the sex allowance, but there’s no doubt Aidan O’Brien has an exceptional three-year-old on his hands who he has trained to perfection.

As far as the best horse in the world is concerned, then of course St Mark’s Basilica comes into the reckoning and Hurricane Lane and Adayar will have their say as well.

And don’t forget about the unexposed Baaeed as well. The William Haggas runner looks a right monster for Shadwell.

Of the beaten horses at York, three stood out for me, namely Sandrine, Suesa and Dragon Symbol.

Sandrine was drawn on the wrong side in the Lowther, and I’m not giving up on her and neither should her partner David Probert. She’s still a right talent for Andrew Balding.

Suesa was another drawn badly against Winter Power in the Nunthorpe, and she ran a cracker in defeat without getting the best of runs. She’s clearly a very useful sprinter and will be tough to beat in the Abbaye.

Dragon Symbol is just so consistent for Archie Watson and Oisin Murphy and truly deserves a Group 1 success.

He is only three, and could have an incredible season next term. He ran a corker in the Nunthorpe and tried his heart out which I love to see.

This week I’m off to Goodwood Saturday where the Celebration Mile takes centre stage. It could mark the return of the Cox Plate runner-up Benbatl for Speed bin Suroor who has a decent animal on his hands in the York victor Real World.

But to look forward to. This is a cracking Flat season…

Did you miss our previous article…
https://www.sportingexcitement.com/horse-racing/racehorse-that-escaped-track-onto-motorway-rescued-again-as-huge-fire-breaks-out-at-track-and-racing-cancelled