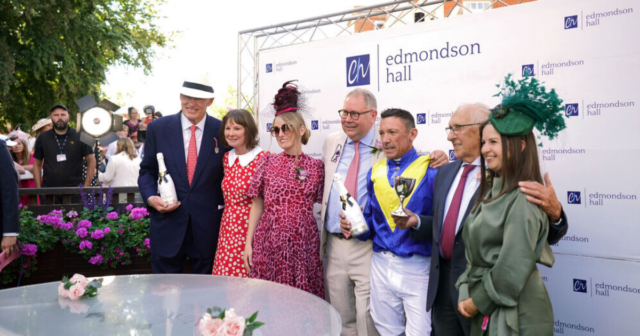 AS one Conservative was given his marching orders at Downing Street, another Tori was back where he belongs.

Off the naughty step and into the winners’ enclosure, Frankie Dettori was reunited with his gaffer John Gosden at Newmarket yesterday.

A sabbatical, a telling-off or just a good old fashioned falling out. Whatever you want to call it, it’s over.

Racing’s dream team are back on the road and ready to play their greatest hits again. The past couple of weeks already look forgotten.

Mighty Ulysses was the first time the names Gosden and Dettori have appeared on the racecard together since Royal Ascot.

After an Ascot to forget for both trainer and jockey, the pair decided to go their separate ways.

And for a couple of weeks, it looked like that might be the end of their near 30-year relationship.

“It would have been a shame for it to have ended like that,” said Frankie after the victory.

Gosden, 71, was fed up with the distractions he felt were getting to his rider. Whatever was said behind closed doors seems to have done the trick.

Frankie, 51, looked laser-focused from the moment he stepped into the parade ring.

He had little time for the autographs or cheers he got two weeks ago at the same track the day after their split was announced.

“Hello, matey,” said the trainer as the Italian came out to greet Gosden before getting the leg up on the favourite.

The cameras flocked to get their shot, as they always do when Frankie is concerned.

But there were no hugs, kisses or even a laugh and a joke, this was strictly business.

After a short chat, off went Frankie on Mighty Ulysses. The next time he would see Gosden was on the podium.

The race could have gone smoother, with Frankie always trying to keep a bit back on his keen-going horse who pulled to the front.

When you’ve ridden at the top for 35 years, you know how to deal with that.

But Frankie had more when it mattered and Mighty Ulysses soon got on top to the delight of the punters. As ever, Frankie is the man when it matters.

He came back to the packed winners’ enclosure and almost sheepishly raised a hand to the cheering crowd.

There was no flying dismount, just a smile and wave. And the punters had clearly expected a bit more given the light-hearted boos. We might just have a new Frankie after all.

Both Gosden and Frankie are ready to move on from the ugly drama of the past few weeks.

In the latter years of their glittering careers, they’re keen for an ending to match and now both are singing off the same hymn sheet.

“I’d be the first one to say I probably had the worst Royal Ascot in my 30-year career.

A composed Dettori makes his way back into the winners’ enclosure

“I’m 51 and John is 71. We sat down and had a chat and we’re not kids anymore, we sorted things out and now we’re going forward.

“That’s in the past and I’m glad we had a winner on the first day.

“Me and John had a discussion behind closed doors. That chat between us is between John and I. We had to iron a few things out and that’s done.

“After the first meeting, yes, I thought that might be it. But we had another go at it and like I said, I’ve known John for 30 years and I’m forever grateful for what he’s done for me as a friend and in my career.

“Neither of us hold any grudges and it’s about going forwards. We’re still friends, otherwise I wouldn’t still be riding for him.”

Frankie was happy to open up but Gosden tried his best to brush the mess under the carpet.

Still, it must have been good to get the band back together no?

“No one likes interruptions or stuff in the public domain but there wasn’t a lot of choice.

“This is becoming a very boring subject. Anyhow, it is good we are back together and we are happy.”

Before anything else could be fired at the trainer he moved on to Mighty Ulysses and the horse’s future.

Gosden is clearly still smarting at how the spat played out in public, but it’ll take a few more winners for everyone to move on.

The Gosden and Frankie show rolls onto Friday afternoon with up and coming star Inspiral ready to strut her stuff in the Group 1 Falmouth Stakes.

Maybe Gosden might let Frankie treat us to a flying dismount if she delivers the goods?