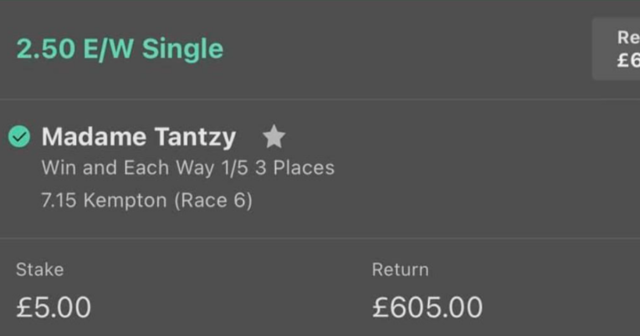 ONE of the biggest shocks of the racing year saw some lucky punters land a massive payout from their tiny stakes on a night of crazy winners.

Madame Tantzy could be backed at as much as 200-1 before somehow winning at Kempton on Wednesday.

The Eve Johnson Houghton-trained runner was the lowest rated horse in the Listed contest over a mile.

And apprentice jockey Georgia Dobie was not allowed to use her 3lb claim.

But it mattered none as the five-year-old mare showed an electrifying late burst of speed to land the £31,000 prize from 13-2 shot Misty Grey.

Even Johnson Houghton admitted she thought the horse had little chance of winning.

But social media was awash with punters who somehow had found the horse, who officially won at odds of 80-1.

Another punter had a slightly more conservative £1 each-way at the same odds, returning a tasty £242 in all.

Even those who missed the highest price on offer were celebrating eye-catching winners.

Amazingly, Caspian Queen finished third at 40-1 meaning the trifecta paid £4634 to a £1 stake.

A shocked Johnson Houghton told the Racing Post: “That was huge. We wanted to get some black type given the pedigree, so this was massive.

“She’s improved all year but I think putting the blinkers on has really helped.

“I thought we might get a place, I didn’t see us winning like that. She’s really done it well. I’m so happy with her.”

All in all it was a mad night of winners at Kempton on the Flat.

While it looked like Green Power would be the biggest outsider when winning the 6.45 at 50-1 before Madame Tantzy’s freak victory.