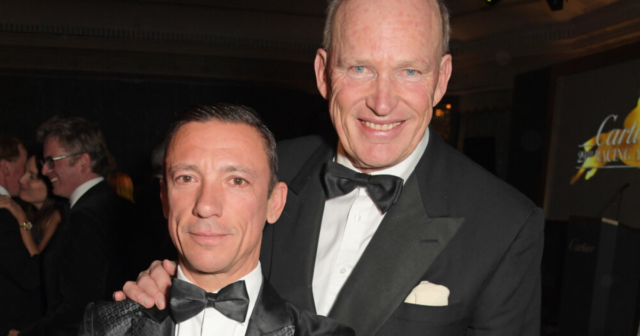 After crunch talks in Newmarket today, Gosden announced that Dettori would – for the time being – not be his go to jockey.

It comes after a turbulent couple of weeks where tensions ran high.

At Royal Ascot, Dettori was slammed by Gosden for a number of defeats and their relationship has not healed since.

Gosden said: “Following speculation in the press, Frankie and I have amicably decided to take a sabbatical from the trainer-jockey relationship but we remain the closest of friends and colleagues.

“Frankie has been – and always will be – one of the family here so I wanted to meet face to face after he returned from his post-Ascot holiday.

“I do not intend to appoint a stable jockey at Clarehaven.”

Dettori became Gosden’s new stable jockey in 2015 after Will Buick left to ride for Godolphin.

Since then the pair have dominated the sport in the UK thanks to horses like Enable, Cracksman, Stradivarius and Golden Horn.

New stars Inspiral and Emily Upjohn have seemingly done nothing to repair their fractured relationship.

Gosden, 71, and Dettori, 51, surely have little time left for a ‘sabbatical’.

The trainer has stated he doesn’t intend to appoint a replacement for now after James Doyle and Hollie Doyle were tipped for the job.

Did you miss our previous article…
https://www.sportingexcitement.com/horse-racing/matt-chapman-rob-hornby-got-a-kick-in-the-goolies-reasons-for-his-jocking-off-dont-add-up-plus-my-big-18-1-tip/