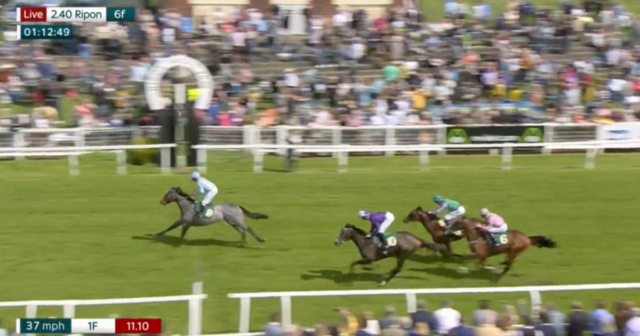 A WINNING owner suffered a heart attack while celebrating at Ripon races.

Neil Buckman ran on to the Yorkshire track to be with Shouldhavebeenaring after the colt’s success in a six-furlong race last Sunday.

Buckman ran out to celebrate with his horse Shouldhavebeenaring, seen her passing the post first at Ripon last Sunday

But he ‘keeled over’ on the way back and needed emergency resuscitation.

It was a dicey 20 minutes but fortunately the nearby paramedics ‘brought him back’ as he lay on the racecourse.

Racing was delayed while Buckman, a pensioner from Cheltenham, received help before being rushed to James Cook Hospital in Middlesbrough.

“He ran out onto the track to greet the horse, celebrate with the jockey and help walk it in.

“You see it all the time but then he keeled over with a heart attack and we thought we’d lost him.

“Fortunately the doctors and paramedics were walking across the track themselves and they were just yards away. They saved his life.

“There was a tricky 20 minutes when they had to resuscitate him and they brought him back.

“The lucky thing is that he couldn’t possibly have been in a better place, there were two ambulances and loads of medical staff.

“He was whisked off to hospital and he’s calm and relaxed there now. He’s probably going to need a triple heart bypass but he’s in good spirits.”

Buckman had only joined Middleham Park six weeks earlier, and this was Shouldhavebeenaring’s second race.

A Twitter post from Middleham Park Racing said: “Our owner who collapsed at Ripon on Sunday would like to extend his sincere gratitude to the doctor/paramedics who attended to him.

“They saved his life. We want to thank the whole team at @RiponRaces for their amazing communication and help. He is in good spirits and doing well.”

Did you miss our previous article…
https://www.sportingexcitement.com/horse-racing/mates-with-macron-stunning-girlfriend-and-winning-big-on-horses-how-tony-parker-keeps-cash-rolling-in-after-nba-career/