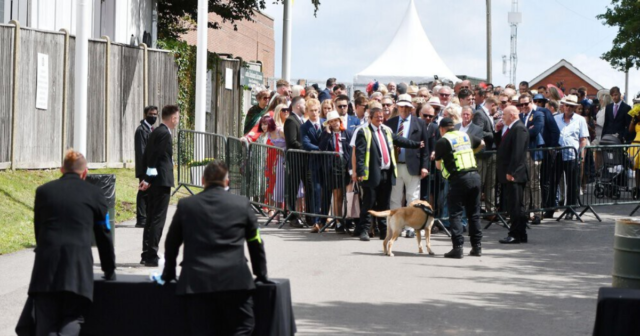 POLICE are hunting suspects involved in brutal attacks on two men at Glorious Goodwood, that left one ‘bleeding heavily’ from the head.

One man, 26, was arrested on suspicion of affray, causing actual bodily harm and possession of cocaine during the flashpoint last Friday.

The fight erupted at around 5.15pm in the Gordon Enclosure.

One woman mistakenly thought one of the men who had been punched was dead after he lay on the floor motionless for ‘three minutes’, according to reports.

The Racing Post reported that six racegoers started scrapping with two men at the Sussex track.

One of the two was punched and his head reportedly smacked the tarmac and started ‘bleeding heavily’, although he did not require hospital treatment.

‘BLOOD ALL DOWN HER DRESS’

A woman nearby put him in the recovery position but according to one witness ‘was left with blood on her hands and all down her dress’.

Police have now launched an appeal to try to identify those involved.

“Both men sustained head injuries, but neither of them required hospital treatment.

“Another 26-year-old man was arrested on suspicion of affray, causing actual bodily harm, and possession of cocaine.

“After being interviewed he was released under investigation.”

One bookie who claimed to have witnessed the fight told the Racing Post: “This was the worst incident I’ve seen since the fight here three years ago.

“The girl on the stand next to me started screaming that this man was dead because he didn’t move for three minutes.

“The lady who helped to put him in the recovery position was left with blood on her hands and all down her dress.

“It was terrible and it felt as though it took a long time for security, medics and the police to reach the scene.”

Another woman who claimed to have witnessed the incident said it was a ‘very horrible experience’.

This year’s Glorious Goodwood was the first big racing meet to take place after the lifting of Covid restrictions on July 19.

Racecourse boss Adam Waterworth said he had told his staff to expect increased alcohol consumption on-site after what was witnessed at the Euros.

Waterworth, who said the racecourse have CCTV footage of the fight, told the Racing Post: “Having seen the Euros, I was briefing people here to say there might be more people than usual drinking too much.

“People have been celebrating being free, and although the vast majority have done it the right way, it’s something we need to keep monitoring.

“I certainly don’t think what happened here could be compared to the sort of things we saw at the Euros.

“All the reports I’ve had are that the incident was handled pretty well.

“The individuals were apprehended, four people were removed and one of them was cautioned for affray.

“We have had a strong police presence and I think our security did pretty well.

“We have also had a number of people turned away because they attempted to bring in drugs.”

PC Stephen Webb added: “Our enquiries are continuing to identify and trace other men involved.

“If you saw the incidents and have any video footage, or if you can put names to any of the people allegedly responsible, please contact us online or by calling 101, quoting Operation Newport.”