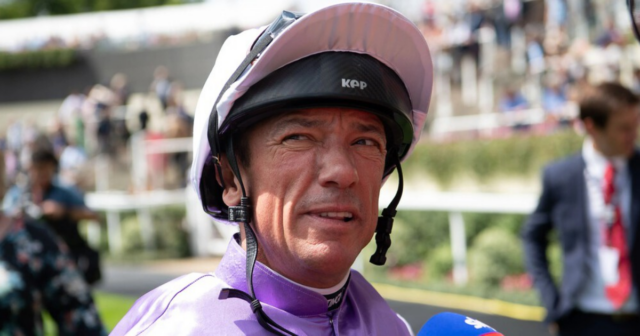 PUNTERS have blasted the ‘horrible decision’ to give Frankie Dettori the key ride on an £8million wonderhorse.

Dettori, labelled ‘The King’ by Verry Elleegant’s owner Brae Sokolski, will ride the superstar mare in France next Sunday.

Sokolski, centre, is certain Dettori is the right man for the Melbourne Cup winner

The 51-year-old legend has endured one of the roughest seasons of his career.

He was kicked off Stradivarius, had a bust-up with trainer John Gosden and saw himself get turned over on a big odds-on shot at Royal Ascot.

Dettori and Gosden ended their ‘sabbatical’ a matter of days later and all seems fine between the pair now.

Millionaire entrepreneur Sokolski – who labelled himself ‘the luckiest man in the world‘ after victory in Australia’s biggest race – thinks there’s nothing to worry about either, saying Dettori is the perfect man for the Group 1 Prix Jean Romanet at Deauville.

The mega booking is a huge boost to Dettori.

And the Melbourne Cup-winning runner already knows all about success at this level having claimed a whopping 11 Group 1s in her career.

The last three of those have come under James McDonald, who rode Nature Strip to King’s Stand glory in June.

But he is not coming to Europe this time, with Verry Elleegant making her debut on the continent.

And Sokolski’s decision to give Dettori the ride has angered some punters.

In response to an Instagram post saying the world’s most famous jockey had been booked came a flood of messages slamming the call.

Another, perhaps having read Dettori will not get a warm-up ride on the horse, wrote: “Totally unfair for her.”

But those remarks seemed to be in the minority, with Sokolski saying he is pumped for the A-list team-up.

He said: “We have the king and queen combining – there is a real romantic aspect to it.

“Frankie is getting towards the end of his career as our mare is, too.

“Ideally we would have him aboard her for her final serious gallop.

“It’s not going to happen but Frankie has the experience and Verry Elleegant is a much more mature mare now.”

Verry Elleegant is now in the hands of French trainer Francis Graffard and her ultimate aim this season is October’s Arc de Triomphe.

She will need to be supplemented to run and is as short as 16-1 with bookies, behind 5-1 Japanese favourite Titleholder.