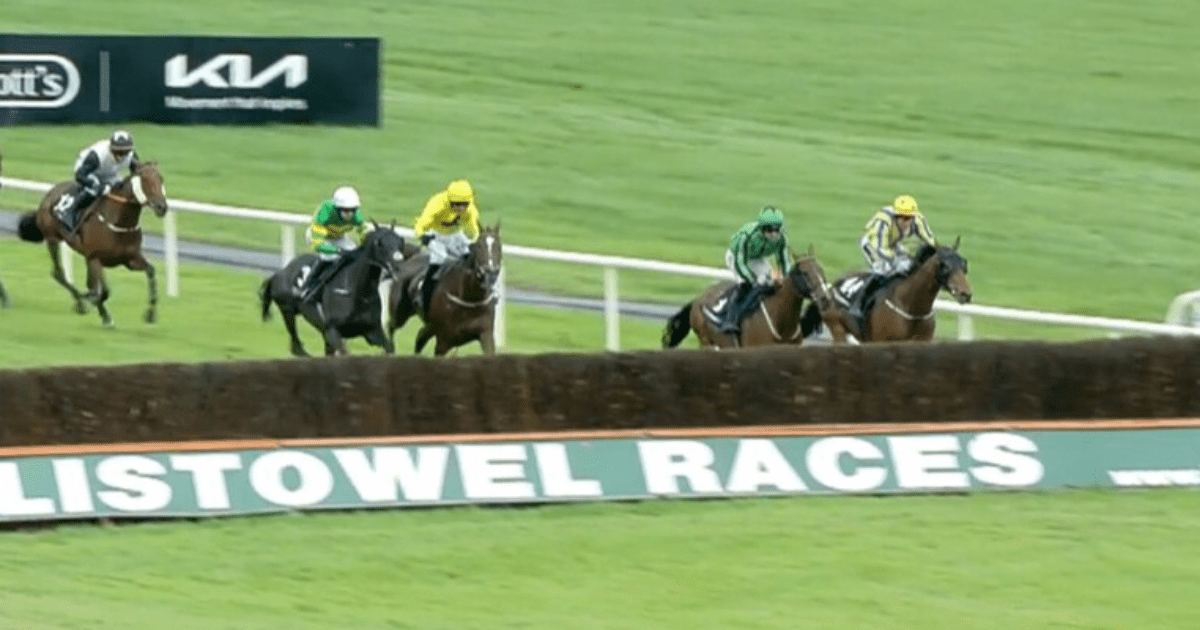 THIS is the bone-crunching final-fence disaster that saw a jockey dumped on his head – and miss out on £100,000.

Busselton (@JosephOBrien2 and @JJjslevin) wins the @GuinnessIreland Kerry National at @ListowelRaces with the horses and jockeys who came down at the final fence unscathed. Our thoughts are with Rock Road, who was pulled up mid-race. pic.twitter.com/WvlPIuEB4y

Hewick and Gainford, in the green silks, looked to be travelling really well approaching the final fence

Hewick landed awkwardly and Gainford was sent flying into the air 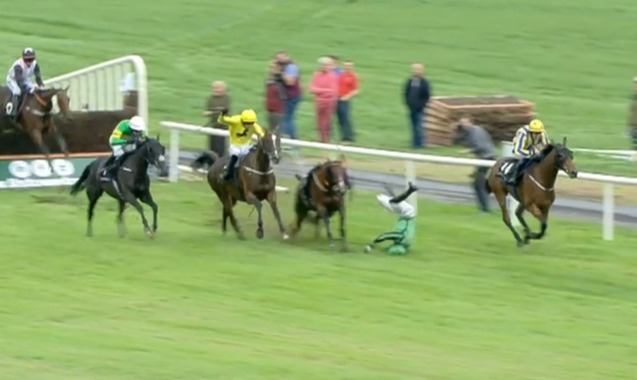 The jockey suffered a bone-crunching, head-first fall onto the turf – but thankfully he and the horse were unhurt

Bought for just £850, genius trainer Shark Hanlon had turned Hewick into a horse for the big occasion.

But, agonisingly, it all went wrong at the final flight of the 3m chase as, challenging leader Busselton, Hewick jumped the flight OK but lost his footing a bit on landing.

That propelled Gainford way up into the air.

Of course, what goes up must come down, and Gainford torpedoed back to earth in dramatic fashion, landing right on top of his head with his body almost vertical.

It meant 13-2 Busselton, trained by Joseph O’Brien, was able to cruise home to victory with 28-1 Recite A Prayer and 17-2 Darasso filling out the top three.

Hewick and Gainford were unhurt but there was tragedy earlier on in the race when the fancied Rock Road was fatally injured.

Speaking after victory he said: “My granddad’s not well so this is for him.”

Hanlon, who reckons Hewick is a potential Gold Cup and Grand National winner in waiting, outlined future plans for his stable star.

He said: “They said he couldn’t win off top weight but I think he would have done.

“He’d gone to the front and we know he stays, having won the bet365 Gold Cup over three miles and five furlongs.

“It’s just unlucky but Jordan and the horse are OK – that’s most important.”

A money-spinning tilt at the American Grand National on October 15 is next on Hewick’s agenda.

Advertisement. Scroll to continue reading.
In this article:bonecrunching, Fall, headfirst