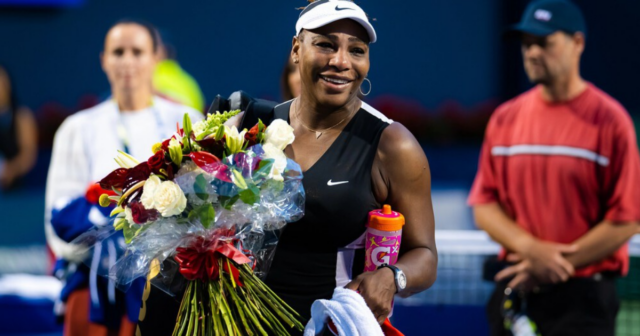 SERENA WILLIAMS will face Emma Raducanu in a blockbuster first round in Cincinnati as the legend continues her farewell tour.

The superstar pairing were drawn against each other at the Western and Southern Open.

She will face reigning US Open champion Emma Raducanu in Cincinnati

It will be the very first – and likely only – meeting between the 23-time Grand Slam champion and the reigning US Open winner.

And it could be the penultimate match of Williams’ glittering tennis career.

The American, 41 next month, revealed last week she is preparing to “evolve away from tennis” and wants to grow her business venture and family.

Many expect the US Open to be her final tournament before retiring – 23 years after winning the tournament as a teenager.

And that would make the WTA 1000 event this week her final non-major.

Raducanu takes on Williams on either Monday or Tuesday.

The winner will then face Victoria Azarenka or Kaia Kanepi in round two.

Serena broke down in tears on the court after losing to Belinda Bencic at the Canadian Open in Toronto last week.

She was presented with a bouquet of flowers following the defeat as her husband Alexis and daughter Olympia watch on.

Williams, who missed a year through a hamstring injury, returned to singles action at Wimbledon and would love to bow out by equalling Margaret Court’s record of 24 Grand Slams.

Raducanu, meanwhile, will be hoping to bounce back from her first-round exit in her hometown Toronto to Camila Giorgi.

The Brit, 19, goes into her title defence at the US Open later this month still struggling to rediscover the fine form that saw her complete the Fairytale in New York a year ago.

Elsewhere, Rafael Nadal will return to action in Cincinnati.

He has not played since withdrawing from Wimbledon before the semi-final due to a 7mm abdominal tear.

The Spaniard has been handed a bye into round two while Andy Murray will face his Australian Open conqueror Taro Daniel for the fourth time this year in qualifying.