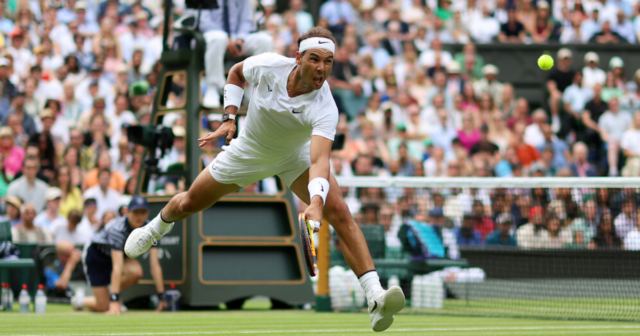 RAFAEL NADAL will be one step closer to securing the Calendar Slam when he faces Nick Kyrgios THIS FRIDAY on Wimbledon’s Centre Court.

The Spanish icon has had a tremendous tournament so far, picking up from where he left off in the French Open.

And his excellent form continued having defeated number 11 seed Taylor Fritz in a mouth-watering semi-final.

But Nadal will be in for a tough ride when he meets a Nick Kyrgios who is fresh off a gruelling win over Cristian Garin.

Plus Kyrgios is not one to hide his emotions during the match, which could help the tie to swing in the Australian’s favour.

What time does Nadal v Kyrgios get underway?

What TV channel is Nadal v Kyrgios on and can I live stream it?

Can I watch Nadal v Kyrgios for FREE?

Advertisement. Scroll to continue reading.
In this article:beone, nickkyrgios, rafaelnadal